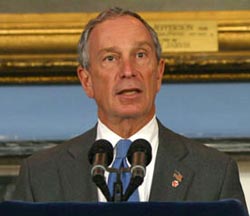 In announcing an update to the city's $59 billion budget today, Mayor Bloomberg detailed a wide range of painful budget cuts. With a "cumulative $4 billion budget gap for FY 2009 and FY 2010," the cuts include "$1.5 billion in savings achieved through spending reductions and other measures, rescinding the 7 percent property tax reduction immediately, and not issuing the $400 property tax rebate." After voting yesterday, Bloomberg told reporters that the cuts were needed to plug an anticipated $4 billion budget shortfall, saying, "We don't know just how deep this recession is going to go or for how long."

Bloomberg has asked all city agencies find a way to cut spending by 2.5 percent this fiscal year, which ends next June, and cut another 5 percent the following year. He will reduce the city workforce by more than 3,000 employees by laying off 600 workers and dropping the rest through attrition. About 475 of those jobs are at the Department of Education, but officials tell the Times the cuts "would not affect classrooms." And over 50 positions will be eliminated from the Mayor's office.

Two hundred staffers will be cut from the New York City Housing Authority, and 600 workers eliminated from parks, street cleaning and children’s services. The plan will also shorten the time firefighter trainees spend at the academy and cut back on nighttime operations at several firehouses. According to the Times, David I. Weprin, chairman of the City Council’s Finance Committee, vowed to closely examine the administration’s numbers and to hold rigorous hearings: "There’s no question we’re going to have a terrible time next year, but the actual revenue numbers are not there yet to justify tax increases being essential."

#budget
#Budget cuts
#layoffs
#mayor bloomberg
Do you know the scoop? Comment below or Send us a Tip