Bloomberg and Gates: Billionaires Against Smoking 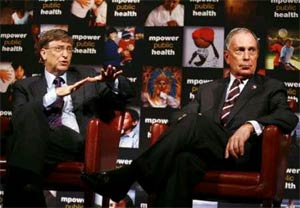 In a blockbuster show of billionaires believing in public health, Bill Gates and Mayor Bloomberg will spend $500 million on anti-smoking initiatives around the world. Five million people die from tobacco-related illnesses each year.

Mayor Bloomberg, a former smoker who has helped implement a smoking ban in NYC's restaurants and bars in 2003. The $500 million number comes from the $125 million he gave to the Bloomberg Initiative to Reduce Tobacco Use in 2005, his promise yesterday to spend $250 million over 4 years on the effort, plus $125 million from the Bill and Melinda Gates Foundation. Bloomberg said at the press conference, “All the money in the world will never eradicate tobacco. But this partnership underscores how much the tide is turning against this deadly epidemic."

Gates pointed out that China produces a third of the world's cigarettes--and where "67 percent of men and 57 percent of doctors smoke"--and that there are no stop-smoking programs in Africa, “Tobacco-caused diseases have emerged as one of the greatest health challenges facing developing countries. The good news is, we know what it takes to save millions of lives, and where efforts exist, they are working."