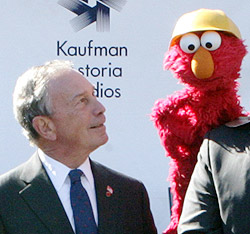 When Mayor Bloomberg announced the city's budget cuts the other week, he said he was rescinding the popular $400 property rebate to homeowners. Well, now it turns out that Bloomberg needs the City Council's approval to do so! Therefore, homeowners can expect their checks because the Council thinks Bloomberg's idea is "dead on arrival."

The reason for the about-face? During a Council hearing, City Council member David Weprin noted a city document that indicate the Council has approval over changes to the rebate, prompting city budget director Mark Page to say, "It was my belief at that time that that was true. I'm not sure it is true. I think the document you're reading is correct, as far as I know." This came after Page, according to the NY Times, initially wasn't going to address the document, "burying his face in his hands."

Cutting the rebate would save the city $256 million. Bloomberg said, "Look at it this way: If we don’t do that, we’re going to have to cut another quarter of a billion dollars out of our expenses." Still, Clyde Haberman's column today is titled, "In Bloomberg We Trust (Unless He Wants to Cancel Your Tax Rebate Checks)." And in previous years, the rebate check has been called a gimmick.