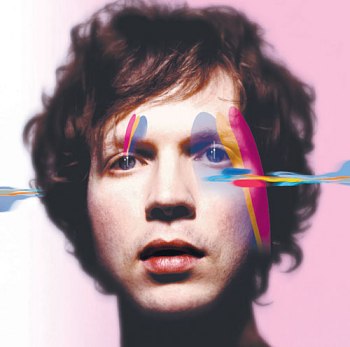 The NY Post has another story in the ongoing ogling at Theresa Duncan's death. The East Village artist apparently "fell into suicidal depression after telling friends that oddball rocker Beck backed out of her movie project." So now we have yet another baffling peek into the paranoid mindset Duncan and her long time boyfriend Jeremy Blake were in when they committed suicide, just one week apart from each other.

In the January issue of Vanity Fair, Duncan's fragile mental health will be further exposed when a friend of the couple, Nancy Jo Sales, publishes a series of paranoid emails blaming Beck (who Blake created the "Sea Change" album art for in 2002, pictured) for the untimely demise of her movie, Alice Underground.

"Beck and I met repeatedly to discuss the film," Duncan wrote to a friend in early 2003.

Duncan accused the Los Angeles-based Beck of subsequently backing out of the project, fearing that his Scientologist handlers wouldn't like the movie, Vanity Fair will report.

"He told me he wanted to leave the cult desperately, and this what they do [sic] when someone knows that."

Her movie, incidentally, was about a troupe of New York prep-school girls who kidnap a rock star and save him from his religion...Scientology. It's like Gossip Girl meets Battleship Earth! Beck, however, claims he was only "casual friends" with Duncan, and when hearing of her email claims, he stated: "That's ridiculous. Totally false. We never met to discuss the film. I did explain to her I wasn't looking to act right then, and with the album, tour schedule, and a baby on the way, it wouldn't be feasible." He added, "Had we been closer and discussed anything as personal as religion, I would have only had positive things to say about Scientology."

Of course, they probably weren't very tight, especially if Beck was hip to the impending lawsuit against him being penned by the couple -- according to that lengthy LA Times article: "In a 27-page chronology written by Blake in October in preparation for a lawsuit against the church that was never filed, he alleges the couple was 'methodically defamed, harassed, followed and threatened' by Scientologists. [Beck] is singled out in the legal document as the person responsible for bringing the couple into conflict with the church." The same article states that Duncan's film was ultimately never made "because the studio and the producers could not agree on a budget and executives remained unconvinced of the film's appeal to its target audience, preteen girls."

Though she did often dwell on the subject, Theresa Duncan's final words are still yet to come -- her pre-scheduled post is set to go live on her blog on New Year's Eve.