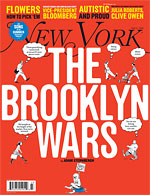 This week’s New York Magazine cover story drops over 5,500 words on the “slightly illicit-sounding” Brownstoner, a blog that for several years has chronicled the steamy vicissitudes of gentrifying Brooklyn. Or rather, the article looks at Brooklyn’s turbulence through the prism of the blog’s commenters – specifically a derisive doomsday prophet who calls himself The What. 5,500 words, one commenter. Up next, a sprawling New Yorker profile on Alex Balk’s Tumblr imitator.

Adam Sternbergh, the article’s author, sees the site’s comments section as a unique forum where people who wouldn’t ordinarily converse offline can gather to air their divergent grievances. Sternbergh calls it “a rolling transcript of the borough’s new anxieties, shameful prejudices, and secret fears,” with The What distinguishing himself as one of the nastier voices in the mix, famous for predicting the collapse of Brooklyn’s overheated real estate market. A sample:

Go to the happy happy joy joy websites about housing. This used to be one of them but The What came along. I took a shit in the Brownstoner’s punch bowl, man it’s fells good. Look at the log floating by, that’s you equity going down the drain.

Sternbergh tries and fails to contact The What and interview him for the piece, to no avail. Brownstoner publisher Jonathan Butler has tried to ban The What by blocking his I.P. address, but the rogue commenter constantly changes locations. In the end his identity remains an unsolved mystery, and today the undiscovered Brownstoner commenters are tasting sour grapes and envy of The What’s inevitable book and movie deals: "Jesus, The What is probably reading this with one hand down his pants,” and “Boring beyond belief. NY magazine lost its relevance in 1974.”

Other commenters have simply decided now that The What’s gone MSM, he’s so over: “The What's demise has begun. now that he's achieved a tiny degree of fame, his appeal will quickly fade. flavor of the month.” Take heed, BabyHitler; Reader's Digest has been making inquiries.

#Article&
#brownstoner
#commenter
#comments
#new york
#ny magazine
#nymag
#profile
#The What
Do you know the scoop? Comment below or Send us a Tip