The National Weather Service has issued another one of their classic caps-lock WEATHER WARNINGS, this time hectoring all humans in the northeast, mid-Atlantic and beyond to brace for a blizzard of wicked blizzarded proportions. A Blizzard Watch will officially be in effect in NYC starting Saturday morning at 6 a.m., and is expected to remain in effect until Sunday at 1 p.m. Here's everything you need to know about a Blizzard Watch, from the NWS:

A BLIZZARD WATCH MEANS THERE IS A POTENTIAL FOR FALLING AND/OR BLOWING SNOW WITH STRONG WINDS AND EXTREMELY POOR VISIBILITIES. THIS CAN LEAD TO WHITEOUT CONDITIONS AND MAKE TRAVEL VERY DANGEROUS.

EXTREMELY DANGEROUS TRAVEL DUE TO HEAVY SNOWFALL AND STRONG WINDS WITH WHITEOUT CONDITIONS LIKELY. SECONDARY AND TERTIARY ROADS MAY BECOME IMPASSABLE. STRONG WINDS MAY DOWN POWER LINES AND TREE LIMBS. 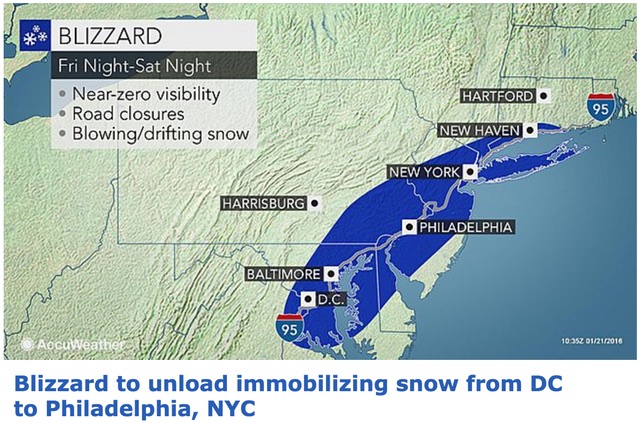 Are you ready to be immobilized by this huge load of snow? Kind of, right?

Current forecasts predict that D.C., Philadelphia, and Baltimore could see as much as a foot and a half of "immobilizing snow" on Saturday. In NYC, somewhere between 8 inches to a foot is currently predicted, but let's face it, a lot could change in 48 hours. One or two choice human sacrifices could probably make all of this go away.

Latest NWS snow map for NYC: (best guess) Not shown: The NAM model has been hinting at the possibility of 24”+ pic.twitter.com/w6dOHqOxET

Weather Underground stresses that "there is less confidence in how heavy the snow amounts will be the farther north you travel along the I-95 corridor, including from New York City to southern New England. Snowfall amounts in this swath will be dependent on the exact track of the area of low pressure associated."

Mayor de Blasio is holding a press conference at 10 a.m. today at the Great Spring Street Salt Shed to update everyone on how the city is preparing to face the wrath of the hungry snow gods.

#blizzard 2016
#snow
#weather
Do you know the scoop? Comment below or Send us a Tip