Blizzard Bonanza: NYC May Get Two Feet Of Snow This Week

The pittance of snow that deigned to fall on NYC this weekend was but an appetizer compared to the feast that lies ahead. According to breathless meteorologists and terrified weather services, NYC and the tri-state area is expected to be hit with a blizzard early this week that could bring anywhere from 1-2 feet of snow to the city. You know what this means.

Yes, you might be scoffing at the extreme predictions of the "European model" above—24.4"?! Is that the metric system?—but this is no Twilight Zone what-if-Germany-had-won-the-war alternate reality scenario. Even the red-white-and-blue blooded weather models predict massive amounts of snow in NYC between Monday afternoon and Wednesday morning.

The city will likely see 1-3 inches during the day on Monday, but things are expected to pick up Monday night and (potentially) all day Tuesday.

The National Weather Service (NWS) has issued a Blizzard Watch for NYC, Rockland and Westchester counties from Monday afternoon through Tuesday evening. Let's take a look at their all caps cowering:

Is NYC in store for a snow day on Tuesday? It sure sounds like it! According to (my limited understanding of) Murphy's Law, this will probably (definitely maybe?) happen. But let's see what the NWS says under "More Information"...

... POTENTIALLY HISTORIC WINTER STORM TO IMPACT THE AREA FROM LATE MONDAY INTO TUESDAY... .

"POTENTIALLY HISTORIC WINTER STORM" people. Is it all happening?

For some historical context, check out the list of the biggest snowfalls in NYC history (through March 2011) below: 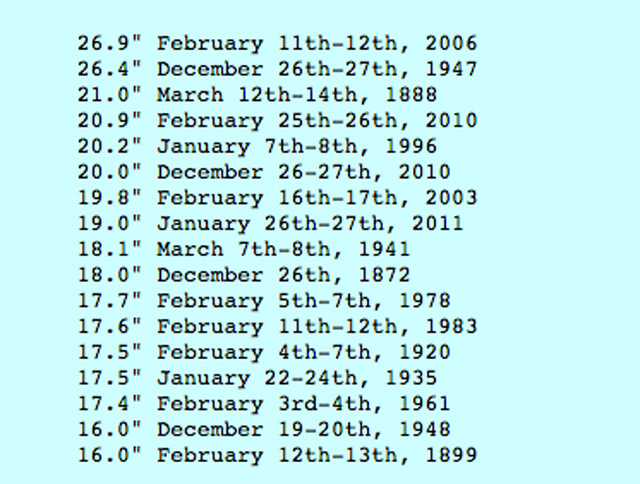 If you're wondering whether this might be an ideal time to start cracking each other's heads open and feasting on the goo inside, well, go with your heart.

#Blizzard
#blizzard 2015
#excitement
#never go full winter
#snow
#weather
#original
Do you know the scoop? Comment below or Send us a Tip