Blame The Boo Birds? Yankees Get Swept By Tigers In ALCS

Last night, the Yankees exited the post-season with a humiliating 8-1 loss to the Detroit Tigers, who completed the four game sweep—Mitch Albom dubbed them "Sweeping Beauty"—to win the American League Championship Series and advance to the World Series. Yankees starting pitcher CC Sabathia, who allowed five runs and 11 hits in three and two-thirds innings, said it was "disappointing" and "embarrassing." 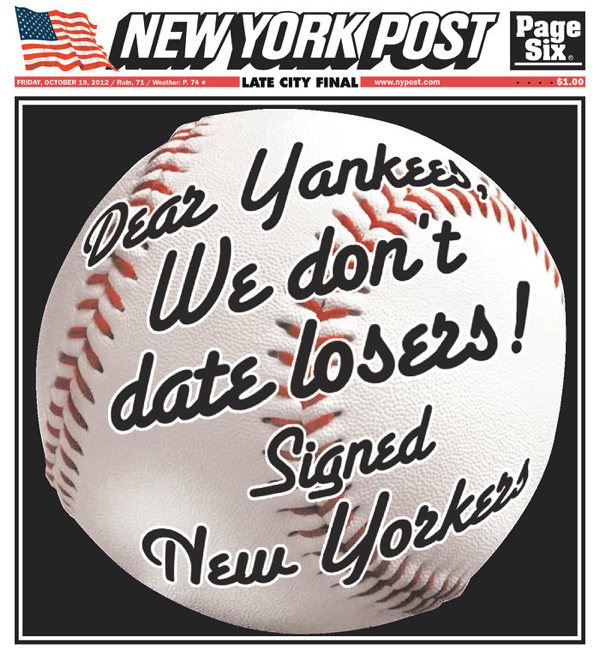 The Tigers did have great pitching and the Yankees have been terrible offensively. Some players said that the negativity from Yankees fans this past weekend ruined their concentration. The Daily News reports that an unnamed player said, "I really think the booing spooked a lot of guys. A lot of guys hadn’t been booed before, and they couldn’t believe how nasty it got in the stands."

Nick Swisher had spoken up about it after Game 1, saying, "That’s the last thing that I ever thought would be in this ballpark, that people would get on you that bad. Especially your home, where your heart is, where you’ve been battling and grinding all year long. It’s just frustrating, man. You never want to be in that spot. It’s not like you’re trying to go out there and do bad on purpose. It’s just tough, man."

The unnamed player told the News that Swisher wasn't the only sensitive soul, "A lot of guys were talking about it in the clubhouse. I was surprised by how much it bothered them. I really don’t think they ever recovered." So you ruined it, Yankees fans, for demanding so much of your expensive team!

Then again, there could have been another reason why the Yankees fell. Andy Pettitte said, "Obviously, we're all getting older." Don't worry—A-Rod wants to come back!

#baseball
#boo birds
#boos
#detroit tigers
#yankee stadium
#Yankees
Do you know the scoop? Comment below or Send us a Tip