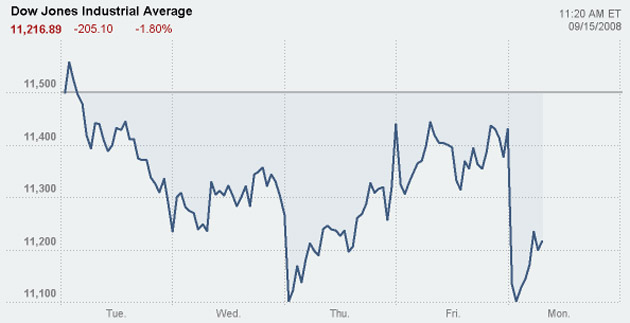 In the first ten minutes of trading this morning, the Dow Jones industrial average dropped more than 300 points, while the major European stock exchanges sank more than 4 percent, the Times is reporting. What color is your parachute? The nosedive is the unsurprising result of several days of increasingly bad news from investment bank Lehman Brothers, which announced its bankruptcy filing after 158 years in business. Today is the first day of trading since the announcement, which also comes with bad news from AIG and Washington Mutual. Since the first minutes of trading, the Dow had recovering slightly, with American stocks doing a bit better than those in Europe.

Stephen Lewis, head of research at Monument Securities in London, tells the Times that "investors are wandering around in a daze. It’s not a panic by any means, but there is a sense that we’ll see a few more weekends like the last two and then we’re looking at a long, long convalescence." The bond market, however, is the place to be, with investors swarming to fixed income investments. In other silver lining news, the price of crude oil dropped more than $7 a barrel, and the Observer looks at how the crisis could impact the city's real estate market, perhaps even leading to lower rents. Crash, Wall Street, crash!

#crash
#lehman brothers
#market
#rent
#stocks
#wall street
Do you know the scoop? Comment below or Send us a Tip