Blackface Assemblyman: Cool If "I Played A Gay Person Next Year?"

Brooklyn State Assemblyman Dov Hikind continues to dig himself into a deeper hole in a bungled attempt to put his ill-conceived Purim costume behind him. First Hikind, a Democrat, told us, "If there's someone out there who has a problem, I'm sorry." Then, during a press conference outside his Brooklyn home, Hikind repeated the same hedged apology, telling reporters he was "sorry if anyone was offended" but also pointing out, "People in the community were dressed up as Arabs. What was that about?" (Hm, maybe they were, you know, ARABS?!) But not content with the depth of his current hole, Hikind later revealed that the backlash had already ruined next year's hot Purim costume idea: "an Indian."

In an interview with the Times, Hikind struck a somewhat petulant tone, saying, "Next year I was thinking I’d be an Indian. But you know, I’ve changed my mind about that. I don’t think that’s a good idea. Somebody will be offended." But he really dug halfway to China last night during a radio interview with Zev Brenner, an admitted Hikind supporter. It seems Hikind felt comfortable enough to vent his exasperation, and went full Hikind on live radio. From the Daily Politics transcription:

"But again, the bottom-line question you're asking me, if I was doing it all over again? I would look at, you know, additional alternatives," said Hikind. "Because my real objective is—it's not about being a black person or Indian, or maybe I would be a gay person on—by the way, would that be ok, Zev? If I played a gay person next year?"

Brenner: "I think whatever storm you had this year, you're going to find people that may be gay, but they won't be happy with your costume if you do that."

Brenner: "Are you contemplating that for next year too?"

Hikind: "You know, [City Councilman] David Greenfield has this committee to decide how to spend money. Maybe I'll emulate what he's doing—Mr. Greenfield—and I'll bring a committee together of leaders to make sure I do next year the thing that's most appropriate. I hope I can actually come up with something."

It's unclear exactly what Hikind's idea of a "gay person" costume entails—and after all this controversy, it seems we'll never know. But while all this media attention may have deprived the world of future spectacularly tone deaf Dov Hikind costumes, at least we can still count on him to open his blundering mouth. The Assemblyman went on to blast the Jewish community's "jerk reaction" to the blackface. "One of the most disappointing things to me is to have certain people in the Orthodox community, who know what Purim is all about, to lower themselves into the mud... when there are certain Jews who go into the mud just to curry favor with certain segments out there that's pretty pathetic," Hikind said. 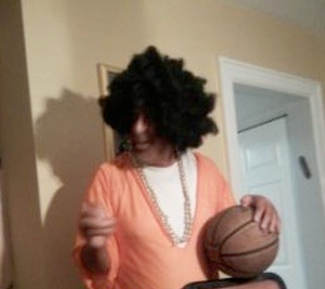 Hikind also published this pissy blog post yesterday, headlined "It's Purim. People Dress Up." He writes, "Yes, I wore a costume on Purim and hosted a party. Most of the people who attended also wore costumes. Everywhere that Purim was being celebrated, people wore costumes. It was Purim. People dress up.

"I am intrigued that anyone who understands Purim—or for that matter understands me—would have a problem with this. This is political correctness to the absurd. There is not a prejudiced bone in my body." But today he's scrambling to do damage control, with another blog post declaring, "Unintentional as they were, I recognize now that the connotations of my Purim costume were deeply offensive to many. I am sincerely sorry that I have hurt anyone. I apologize for the pain that I have caused anyone by this incident, and by any remarks that I have made in connection with it."

But the backlash is still picking up steam, and it looks like this story isn't going to just disappear overnight. Yesterday the Black, Latino & Asian Caucus of the New York City Council sent a sternly-worded letter to Hikind informing the Assemblyman that "We find it deeply disturbing that, not only did you make the conscious decision to wear the offensive costume, but your comments following the media blowback suggest that you have no consideration for the history of blackface and the trivialization of the black experience in this country.”

And today a group of "elected officials, African American Clergy and the African American community" are holding a press conference on the steps of City Hall to "denounce the insensitive disregard and disrespect shown to our community by New York State Assemblyman Dov Hikind." Check back later for a full report. In the meantime, here's video from Hikind's press conference yesterday:

#blackface
#brooklyn
#dov hikind
#purim
#racism
Do you know the scoop? Comment below or Send us a Tip