The action was carried out by a group of anonymous protesters who go by the name The Never 21 Project. According to a statement issued by the group, their goal was to draw attention to the number of "young black lives that have been lost to police violence before ever reaching 21-years-old, who were never afforded a true childhood... by the police."

The Never 21 Project's website, which mimics Forever 21's white font and black and yellow color scheme, features mini-biographies of kids and teenagers who have lost their lives at the hands of the police, with emphasis on their ages: Aiyana Jones (7), Michael Brown (18), Tamir Rice (12), and Trayvon Martin (17). A statement on the homepage reads:

This morning, an anonymous Never 21 organizer recounted how the action unfolded inside the store. "It was kind of the opposite of shoplifting," he explained. "We called it shop gifting, because we were putting shirts into the store rather than taking them out." First a banner team, including a videographer and a legal observer, walked up to the second floor to hang the banner. The mannequin team entered as the banner team was on its way out, followed by three more protesters tasked with adding T-shirts to the clothing racks.

I commend all the activists behind the #Never21 movement/demonstration. So powerful. Shit gave me chills. Dope.

Another protestor added, "We planned for a long time, and practiced beforehand on mannequins. We had the shirts sized large so that they would be easy to slip on." She explained that the group didn't run into any problems, because the store was so crowded. "No one paid attention to us," she said. "The door alarm kept going off for people who were trying to make returns." The biggest snag of the afternoon involved the front window mannequins, which stood on elevated platforms that were tricky to climb.

After 20 minutes, store management recognized what had happened and removed the t-shirts. But not before passersby noticed what was going on. 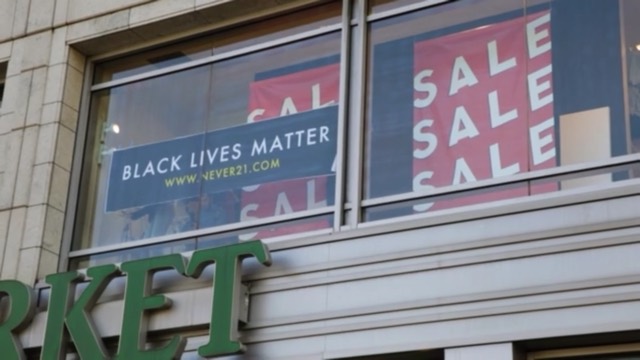 Never 21 stresses that their action was not an attack on Forever 21. Rather, they see this as an opportunity for a huge company to stand behind Black Lives Matter. However, one participant acknowledged a bit of negative feedback. "Someone online wondered where the proceeds were going," she explained. "They thought Forever 21 had made the shirts themselves, and were selling them for profit." However, "Once people realized that it was a culture jam, they were more positive than I expected."

Here's a video of the action, shot and edited by Never 21.

No arrests were reported in connection with the protest. Forever 21 said in a statement this afternoon, "Forever 21 is not associated with the Never 21 Project and had no prior knowledge of their public demonstration."

#black lives matter
#forever 21
#Never 21
#original
Do you know the scoop? Comment below or Send us a Tip