Like clockwork, stores hyped up their Black Friday/Doorbuster sales and potential shoppers waited outside for hours, in hopes of getting great deals. A crowd was waiting outside a Jersey City Best Buy; one person told WCBS 2, "There's a lot of people on this line for laptops, like HP laptops for $197. Normally it's $500 or $600," with another possibly bragging that he "was here yesterday since 12 o'clock in the afternoon"—as in noon on Thanksgiving.

At the Valley Stream, Long Island Wal-Mart, where an employee was trampled to death by the surging Black Friday crowd, security was tight; Newsday reports, "When one man cut in line outside the store it was more than just a lapse in courtesy - it was a police matter. Two uniformed officers responded, interviewed witnesses and sent the man to the back of the line." However, in spite of all the precautions, one person who went through the line said, "The system didn't work at all. It took me for six hours for one item." 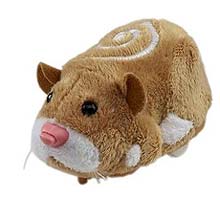 In Manhattan (and all over the country), parents waited outside Toys R' Us to get their hands on this year's hottest toy, Zhu Zhu, the robotic hamster that retails for $7.99. According to the Daily News, "Scores of shoppers scrambled through the doors and up an escalator at the Toys 'R' Us in Times Square at midnight Friday chanting, 'Zhu Zhu! Zhu Zhu!' Store employees urged "no running" to little avail. The fuzzy creatures were being sold on the second floor." And the Post says, "The store shut its doors at 7 p.m. to gear up for the onslaught, and shoppers had to go on a separate line for the mechanical rodent. The lines began moving at 12 a.m." One woman said, "I feel wonderful, It's like winning the Lotto."

Another woman told the News she wanted to buy one for a "family friend - an 8-year-old girl who is a cancer patient at Lincoln Hospital in the Bronx" while her son was getting one for a rainy day: "On eBay, that's like $60."