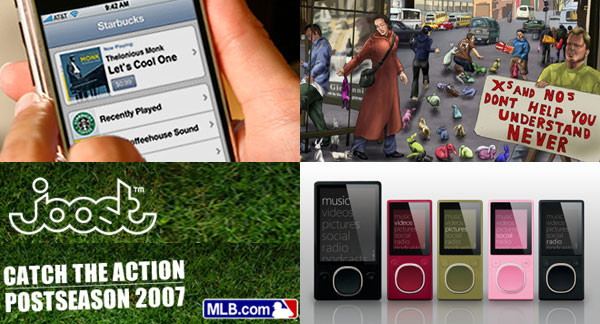 iTunes/Starbucks Partnership Launches On Tuesday the announced Apple & Starbucks partnership, to offer wireless iTunes in store experiences, launched in 600 locations in Seattle and New York City. Laptop (both Mac and PC), iPhone and iTouch users will be able to purchase music from the iTunes music store wirelessly at participating locations. What is really interesting is that you'll be able to find out the songs that are playing at your location via a Starbucks section of the store that is only available in iTunes while you are at Starbucks. If you hear something you like on the stores audio speakers, you can purchase it via your device, instant satisfaction.

Of course, that is in theory. When we stopped by on Tuesday, we were unable to connect to the Apple store at multiple locations. We tried multiple times each day, and it wasn't until Thursday that we were able to try it out. Once it was working, we were able to easily purchase music on our iPhone, and then the music synced with our Mac when we got home as promised.

From now until November 7th, Starbucks will be handing out free "Song of the Day" iTunes download cards. Each day a new song (we got one from Dylan and KT Tunstall) will be available to download, and by the end there will have been 50 million "Song of the Day" cards given out to customers.

Sony Bravia Ad rip off Artists work The Sony Bravia ad that we were so fond of earlier this week has started to come under some controversy. It turns out that LA based artists KozyNDan had created a panoramic with bunnies taking over NYC a number of years ago. They were contacted by Passion Pictures, whom produced the spot, for samples of the working (including the panorama) but never heard from them again. Two years later, this amazing ad is released. It's hard to not see the blatant rip off of KozyNDan's work, and we hope that something positive comes out of it for them. Read this article on Gizmodo as they go into a bit more detail.

MLB & Joost Partnership Joost, which until this week was in a private beta, finally went public allowing anyone to signup and watch 15,000 from various partners. Joost has had a strong buzz behind it for almost a year being the next big thing from the creators of Skype and Kazaa.

With their recently announced partnership with MLB, users of Joost will be able to watch for free post season coverage with the Daily rewind. This half hour recap is normallt $1.99 on iTunes but it will be free on demand on Joost for the rest of the post season. Watch the Phillies & Cubs get swept via highlights over and over again!

Zune 2.0 Microsoft, still trying to catch up with the iPod, announced Zune 2.0. The new Zunes come in multiple sizes now. Ranging from $149-$249 and storage options in 4, 8, and 80 gigabytes, the devices support WiFi Sharing, FM radio built in which help set it apart from iPod offerings.

The most brilliant move from Microsoft with the new Zune is not the new ZunePad (the nickname for the new trackpad on the Zunes) but rather that the software for these new models will be upgradable to the previous generation of Zunes! This really is a big departure from anything we've seen before, as Apple has often gotten ripped for not offering OS upgrades to week old iPods.

And finally David Pogue reviewed the $100 laptop with glowing praise. The Laptop is designed to be an environmentally friendly, durable, renewable energy, cheap laptop for third world nations.