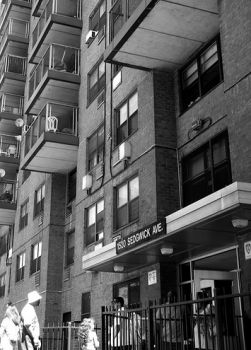 Some good news in the ongoing saga to save 1520 Sedgwick, better known as the Birthplace of Hip Hop. Today Senator Schumer, who has been lobbying on behalf of the tenants to preserve the building's affordability, announced that "the city Department of Housing Preservation and Development rejected the proposed sale to developer Mark Karasick because current rents could not be sustained if the sale had gone through." The move doesn't insure that the building’s owner won't still opt out of the Mitchell-Lama program, however.

In January a press conference was held to detail the residents’ financial and long term ownership plan, a solution to save the affordable housing status. Today Schumer added that the decision to not sell to Karasick "paves the way for tenants to negotiate directly with the owner," and currently tenants are still working on a way to purchase the building.

The LA Times reported last week that the tenants have already raised $11 million through online donations and from supporters like DJ Kool Herc (the former resident who brought hip hop to the rec room), Rep. Jose E. Serrano and of course Sen. Charles E. Schumer. However, they still need $14 million to accomplish their mission.