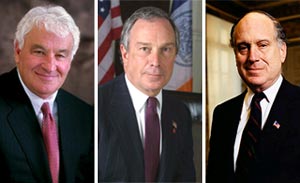 Billionaire term limits proponent Ronald Lauder (pictured, far right) confirmed his support for Mayor Bloomberg's and the City Council's legislation to add another term to term limits--and expressed his hope it would be overturned after (presumably) Bloomberg was re-elected. Lauder told the NY Times that he believes term limits will go back to two after a voter referendum in 2010, "To me, this is a temporary solution."

However, Lauder also referred to the economic crisis, "I think we’re damn lucky to have a mayor here who understands this stuff and who understands the city." Lauder had met with Bloomberg at Gracie Mansion yesterday to discuss the ins and out of a temporary vs. permanent term limits change. However, many other elected officials, including ones hoping to run for mayor in 2009, have been critical of the maneuvers and City Councilman Bill deBlasio met with billionaire Tom Golisano (pictured, far left) to gauge his interest in helping keep terms to two.

As for City Council Speaker Christine Quinn, she claims she's still undecided. And when NY1 asked about the public's voice in the matter, she said, "At the end of the day, if these changes go through, they'll have to be voted on by 51 individuals that have been elected by districts in all five boroughs."

Yesterday, State Senator Hakeem Jeffries introduced a bill requiring "voter approval to change term limits in New York cities where the law exists" and today two groups filed ethics complaints against Bloomberg re: term limits. Also interesting: Opposition to extending term limits only gained strength this week, because in the months (and years) Bloomberg has been gearing up for third term talk, no one actually believed it would happen.

#City Council
#mayor bloomberg
#Ronald Lauder
#term limits
#tom golisano
Do you know the scoop? Comment below or Send us a Tip