A group headed by an investment banker (Michael Bloomberg's girlfriend) has approved the lease for a $150 million, 2.4 acre public park suspended above the Hudson River designed and largely paid for by a billionaire.

Sure, the Army Corps of Engineers and the State Department of Environmental Conservation still have to sign off on the deal, but such things go by friendship in a rush like this; the lease is for 20 years, with an option to renew for another 10, and construction is set to begin by 2016.

The Times reports that billionaire Barry Diller initially approached the investment banker, Diana Taylor, who heads the Hudson River Park Trust, with an idea to kick in $35 million for his dream park. (Do you have an idea for a park? Great! Do you have billions of dollars at your disposal? Oh.) That turned into cutting a $113 million check for the levitating FernGully you see before you; taxpayers are picking up the rest of the tab.

Without troubling the public with the details of the public park, Diller, who is married to fashion mogul Diane von Furstenburg, appointed a group of prominent theater producers, as well as essential Hollywood angry person Scott Rudin to produce events at the park that would help generate the revenue necessary to sustain it. 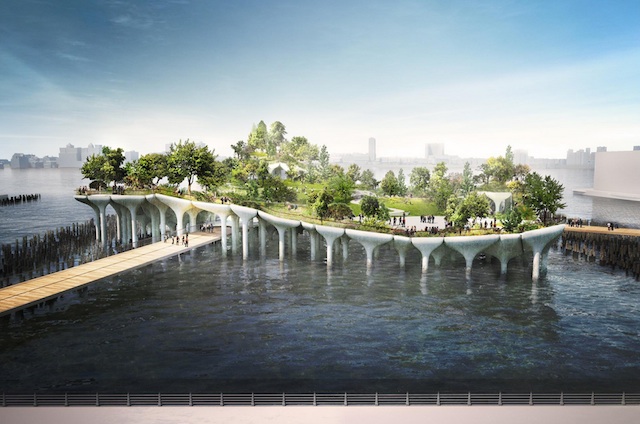 Diller's joy is palpable in a November press release announcing the plans for Pier 55:

“We are so lucky as a family that we get to do this,” said Barry Diller. “If the Pier when completed is anywhere as much sheer fun, strife, stimulation and joy as it has been conceptualizing it, and in working with Diana Taylor and Madelyn Wils, the Heatherwicks, and the glorious team of Scott Rudin/Stephen Daldry/George Wolfe and Kate Horton to make it a reality, then it will exceed my wildest expectations.”

“New York has always reminded me of Venice, so I am happy the time has come to properly honor its waterways,” said Diane von Furstenberg. “What better than a park on the city’s western bank to rest, watch a sunset or a performance?”

It's settled: anyone who has been to Venice will definitely appreciate this park.

Of course, there are environmental concerns when you sink 300 concrete columns into the Hudson River to support a parallelogram-shaped structure 62 feet above the water, but Hudson River Park Trust president Madelyn Wils told the Times not to worry:

“We take our role as stewards of the Hudson River Park sanctuary seriously,” Ms. Wils said in a statement. “And that’s exactly why we not only conducted a thorough environmental review in accordance with state law, but went beyond what was required by inviting public comment on that review.”

Wasn't it nice of them to let the public comment on the construction of a public park?

"This could be the greatest thing since sliced bread, however, this behind closed doors deal represents a very troubling trend of allowing private citizens and groups tremendous influence over our public spaces," says Geoffrey Croft, the president of NYC Parks Advocates.

It's just like our Governor always says: taxing the sort of people who have hundreds of millions of dollars lying around is a bad idea. They might leave, and then they wouldn't get to decide how we all live and work and play!