After nearly two months of testimony and 11 days of deliberations, a jury found the billionaire co-founder of the Galleon Group hedge fund guilty of all charges related to what had been described as the "biggest insider trading ring in a generation": Raj Rajaratnam was convicted of 14 counts o securities fraud and conspiracy. The NY Times called him the most prominent figure convicted in the government’s crackdown on insider trading on Wall Street" while the Post declares it "a major victory for the government’s largest battle against illegal trading since Rudy Giuliani took on Michael Milken in the 1980s." 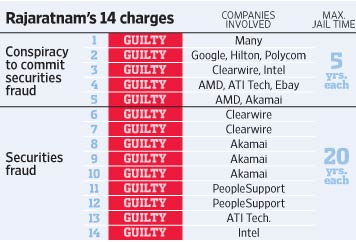 Graphic from the Wall Street Journal

According to the Wall Street Journal, "The jurors all looked serious, some looking down. When the judge's deputy polled the jury to see if it was their verdict, the last jurors said 'Yes,; very loudly. Juror Leila Gorman Gonzalez, swiping a subway card to get on a train a block from the courthouse, said of the verdict, 'There was just a lot of evidence.' She said she was 'relieved' that the trial was over, and declined to comment further." See that, fat cats accused of misdoings—people who take the subway will be on your juries (hipsters, too).

Rajaratnam, who had a net worth of over $1 billion in 2009 and who faces up to 19 1/2 years in prison, is expected to appeal, and prosecutors have asked that he be held in custody, because he is a flight risk ($100 million bail aside, he has foreign properties). A Wayne State law professor and former federal prosecutor, Peter Henning, told Bloomberg News, "He joins the pantheon of Ivan Boesky and Gordon Gekko."