When Camilla first arrived at Rikers Island in September 2016, she was placed in Building 9 of the Rose M. Singer Center, the island’s only women’s unit, to detox. “Building 9 is separate from the rest of Rosie’s,” she explained to Gothamist. “There’s no access to anything in Building 9.”

Thus, although the New York Public Library had opened a permanent library at the Singer Center two months earlier, Camilla and the other Building 9 residents had no access to those books. Staff allowed the women there one newspaper—and it was often nearly shredded with news about arrests, charges and Rikers Island literally cut out.

Camilla, who did not want us to publish her last name because she doesn't want to be identified by her stay on Rikers, recalled, “I tried to read the ingredients labels off commissary [items] because I was desperate for something to read,”

On Tuesday, the City Council’s Criminal Justice Committee heard testimony on Councilmember Daniel Dromm’s bill, Int. 1184, that requires the Department of Correction to provide access to the library for all incarcerated people within 48 hours of entering the jail system. The Department would be required to report on the number of books they receive, the source of those books and, if books are censored, the reason for the censorship.

Only two of the city’s 11 jail buildings have permanent libraries—and these were created only recently. In July 2016, the New York Public Library opened a library at the Singer Center. The majority of the 1,200 books were either donations or withdrawals and discards from the library system. Two years later, in April 2018, the New York Public Library converted a storage room into a permanent library—this time at the Manhattan Detention Complex.

There’s a third library, but it only exists for a few hours one day a week. Every Friday morning, librarians from the New York Public Library bring books into the gymnasium at the Eric M. Taylor Center on Rikers Island. Men in that particular jail are escorted to the makeshift library to peruse and check out books. Then, the remaining books are packed away into a closet until the following Friday.

For people in the city’s other eight jail buildings, that leaves the book cart. Librarians of the city’s public library systems bring a book cart around to the housing units where people can check them out. There’s no uniformity as to how often a book cart is allowed onto a housing unit—for some units, it’s once a week; for others, books might only come every other week or as often as twice a week.

For people in punitive segregation (there are 129 of them, as of November 30, 2018) who can spend anywhere from 17 to 23 hours in their cell, access seems to be even more spotty. DOC officials testified that people in punitive segregation do not have access to either a physical library or the library’s book carts, a declaration that shocked and appalled Dromm and his colleagues. But librarians from the New York, Queens and Brooklyn public libraries later testified that they do indeed provide access to books and magazines for people in segregation as well as in the city’s Enhanced Supervision Housing. In some units, they are able to meet the readers face to face; at others, the would-be reader receives a list of available genres. They choose one, submit the slip and in return receive a book.

Michael Tausek, the DOC’s deputy commissioner for programming and community relationships, told the Committee that the Department does not support the bill.

“While the Department supports the spirit of Int. 1184 and is committed to working with library partners and the Council to improve existing library services, we do not believe that this bill would have the desired outcome of actually increasing the level of access to reading materials,” he testified. The DOC does not collect data on how often a person’s request to visit the library is granted or denied.

The librarians who actually work in the city’s jails disagree. In 2018, 31,000 people incarcerated in New York City’s jails checked out 68,000 books and magazines from the jails’ existing library services, said Nick Higgins, the chief librarian for the Brooklyn Public Library. But, he told the committee, if each jail had a dedicated library, “we can do so much more.”

In co-authored testimony, Queens, Brooklyn and New York Public Library correctional librarians noted that having dedicated libraries would establish access to educational opportunities and resources for people entering the jails and, upon release, create a stronger bridge back to a community library, which has the potential to reduce recidivism. 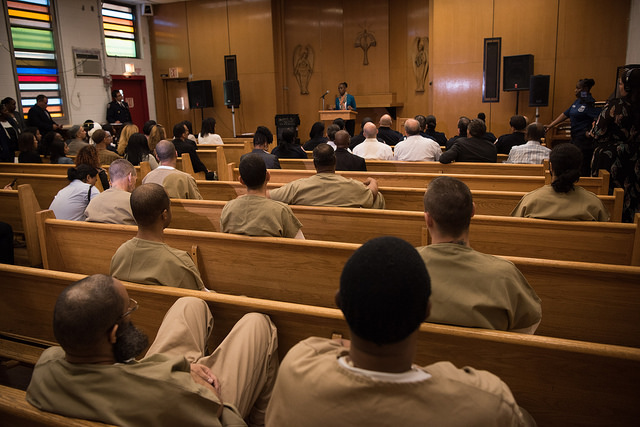 Beena Ahmad of Books Through Bars NYC, an all-volunteer group that sends books to people incarcerated nationwide, read from the group’s collectively-written testimony, including excerpts of requests they receive. (Disclosure: I am a co-founder of Books Through Bar NYC and was an active volunteer until 2010.)

One of those excerpts was from a father currently in jail in Brooklyn, who wrote: “I’m a father of an 11-year-old daughter (who needs me in her life). I heard that it’s possible that I can maybe request and receive some books from you free of charge.”

Among the topics he requested were becoming a better father, spiritual living, and biographies of people “who had a rough life while young and overcame his obstacles.”

Ahmad told the Council that “this bill is a step in the right direction in that it recognizes the importance of providing access to free books.” However, she voiced the group’s concern that the bill does not create any funding to buy books for the libraries. “We hope that the City Council bill will do more than create empty shelf space.”

Dromm told Gothamist that this is the bill’s first hearing, and that cost estimates would be determined later on. The councilmember added that the city’s plan to shut down the jails on Rikers Island shouldn’t factor in to the decision to create libraries there, noting that he introduced the bill after hearing numerous complaints from formerly incarcerated people that library services and book access is minimal.

“There is space right now that DOC could use to set up a physical library,” Dromm said. “If they don’t do that, they should have a [book] cart delivery more frequently. Once a week or once every two weeks doesn’t seem sufficient.”

It certainly didn’t to Camilla, who was only permitted to visit the library at Rosie’s once every two weeks. At each visit, she was allowed only two books. “I went through those books pretty quickly,” she recalled. Fortunately, she noted, her family mailed her books, a luxury that not every family can afford. But jail rules prohibit having materials that aren’t legal materials that measure more than 12x12x12 inches. When jail staff found her mini-library, Camilla was forced to mail her books home. “I could be fighting. I could be selling drugs. But no, I’m getting books. And they were mad at me.”

#jails
#Rikers Island
#longform
#original
Do you know the scoop? Comment below or Send us a Tip