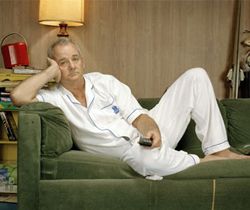 It was around 3:30 a.m. on Halloween when Bill Murray surfaced at Dave Summers's loft party in East Williamsburg. The 58-year-old Garfield star—who had never met the 29-year-old Summers—had been party-hopping with indie darlings MGMT after their show at the Music Hall of Williamsburg, and wound up staying at the loft until one sanctimonious hipster finally told him, "I think you're making bad life choices." Murray's wife of 11 years divorced him last May, and Page Six Magazine has strung together a number of Bill Murray sightings at random parties and lame bars in NYC, where he sometimes talks to young women!

They're calling it a mid-life crisis, but let's just call it Being Bill Murray; he's rich, famous, single, perennially hip—and how cool is it that he's wandering among the little people instead of staying sequestered behind the velvet rope like his peers? Sure, maybe he is, as Page Six puts it, a little "stuck in his own version of Groundhog Day meets Lost in Translation," but who could blame him? As Phil Connors' mused in the former film, "I was in the Virgin Islands once. Met a girl. We ate lobster and drank pina-coladas. At sunset we made love like Sea Otters. That was a pretty good day. Why couldn't I get that day over and over and over?" You keep trying Bill Murray—and if you want to crash our office party, we won't judge you.

#bill murray
#new york
#nyc
#parties
#party
Do you know the scoop? Comment below or Send us a Tip
A new Gothamist is coming! We’ve moved comments over to our beta site. Click here to join the conversation and get a preview of our new website.