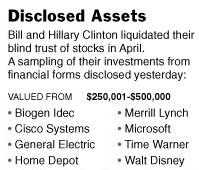 The New York Times has a story today on the required unveiling of NY Sen. Hillary Clinton's investments, which were previously held in a blind trust jointly owned with her husband and former President Bill Clinton, but needed to be disclosed as Sen. Clinton is now running for President herself. The trust was liquidated in April after the Clintons learned that their holdings included potentially politically damaging investments in military contractors, oil, pharmaceutical companies, and Wal-Mart. That the latter three could be considered politically damaging is interesting and says something about America's political landscape, because we imagine that 95% of all Americans either consume oil, ingest pharmaceuticals, or shop at Wal-Mart in any given week of the year.

Given the Clintons' prior brushes with political scandal, however, the pair are erring on the side of caution and will hold their assets as cash for the remainder of the campaign season. The trust is valued at somewhere between $5 million and $25 million dollars, and the Times notes that this is a significant increase over its value when the trust was formed in 1993, when Bill Clinton assumed the office of President. Regulations require that investments must be disclosed at the time of a trust's formation, and then further investment decisions are shielded by an officeholder's knowledge. Financial disclosure statements revealed, according to the Times, that the Clinton's net worth is between $10 million and $50 million.

While Hillary Clinton earned about $350,000 in royalties from sales of her book "Living History" in 2006, Bill raked in approximately $10 million in speaking fees last year. The couple will apparently take a big hit in capital gains taxes next April, due to the liquidation of their investments two months ago.

The Times points out that the liquidation move was, in part, a response to a harsh critique that was released on a "not-for-attribution-basis" by a political rival that the Times comically identifies as Sen. Barack Obama. The Illinois Senator's campaign refused to comment on why it didn't want to be connected to the critique that characterized Clinton as a "Hillary Clinton (D-Punjab)", for investing in a company with business interests in India, but wondered all the same why anyone would take umbrage at such a report.