Bill Clinton Talks Hillary Campaign: "I Am Not a Racist" 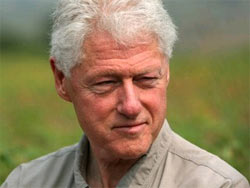 But the regrets aren't the ones you're thinking of: He said emphatically, referring to his remarks after Barack Obama's South Carolina victory (when he had referred to Jesse Jackson's 1984 and 1988 S.C. primary wins), "But I am not a racist. I've never made a racist comment and I never attacked him [Obama] personally." Hmm, maybe Clinton is just regretting his Bosnia remarks. Or the fairy tale one.

Clinton, who is scheduled to speak at the World AIDS Conference today in Mexico, added, ""I'm not and never was mad at Senator Obama. You know he hit her hard a couple of times and they hit us a few times a week before she ever responded in kind. The only thing I ever got mad about was people in your line of work pretending that she somehow started the negative stuff. It's a contact sport."

It's unclear what role the former president will play at the convention, but Hillary Clinton is rumored to be the keynote speaker.