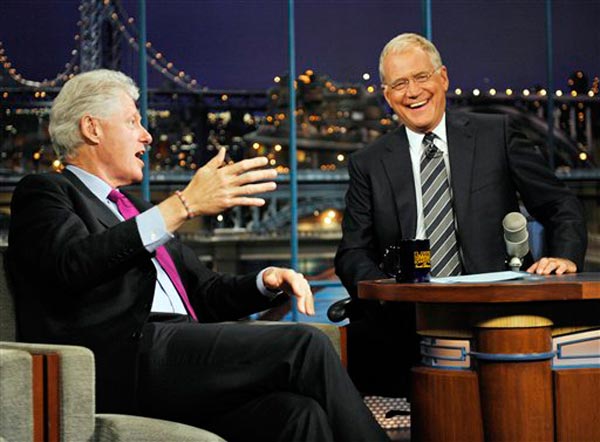 Bill Clinton was on the talk show circuit yesterday, to promote his Clinton Global Initiative which meets this week. But naturally he discussed the current presidential campaign. The former president told the View ladies that Hillary Clinton wasn't dying to be VP, "She said, 'If [Obama] asks, I'll do it because it's my duty.' She loves being a senator for New York and has more freedom to develop her positions on the issues." But then he did add:

It's a very personal decision who should be vice president. I like Senator Biden a lot. I think he was a good choice. [Hillary Clinton] would have been the best politically at least in the short run because of her enormous support in the country. I think that [Obama] felt more comfortable with another choice and you have to respect that.

He also didn't disagree that there was sexism in the media, he said it was maybe subconscious and therefore insidious (see clip). Clinton also appeared on the Late Show with David Letterman, saying he believes Barack Obama will win, but the following guest, Chris Rock, was a little skeptical of Clinton's support--and offered his own thoughts on Sarah Palin:

Clinton also took time to explain why the American public was so taken with Palin. From the NY Times:

"I come from Arkansas; I get why she’s hot out there,” Mr. Clinton said. “Why she’s doing well.”

Speaking to reporters before his Clinton Global Initiative meeting, Mr. Clinton described Ms. Palin’s appeal by saying, “People look at her, and they say: ‘All those kids. Something that happens in everybody’s family. I’m glad she loves her daughter and she’s not ashamed of her. Glad that girl’s going around with her boyfriend. Glad they’re going to get married.’ ”

Mr. Clinton said voters would think: “I like that little Down syndrome kid. One of them lives down the street. They’re wonderful children. They’re wonderful people. And I like the idea that this guy does those long-distance races. Stayed in the race for 500 miles with a broken arm. My kind of guy.”

World leaders and other luminaries will be gathering for the Clinton Global Initiative. Both Barack Obama and John McCain--as well as Lance Armstrong, Queen Rania, and Bono--are addressing the group.

#barack obama
#bill clinton
#chris rock
#david letterman
#hillary clinton
#sarah palin
#the view
Do you know the scoop? Comment below or Send us a Tip
A new Gothamist is coming! We’ve moved comments over to our beta site. Click here to join the conversation and get a preview of our new website.