Bill Bratton: NYC NOT "Being Overrun By Elmos" Or Wolfpacks

Police Commissioner Bill Bratton took advantage of a late-summer afternoon yesterday to assemble some charts and excoriate the police unions for suggesting that his tenure is a return to the Bad Old Days. "Is this press event a rebuttal? It certainly is a categorical rebuttal," Bratton said. "We're not being overrun by Elmos."

Earlier this week, Ed Mullins, the president of the Sergeants Benevolent Association, wrote in an advertisement that the city is "lurching backward to the bad old days of high crime, danger-infested public spaces and families that walk our streets worried for their safety." In reality, the ad had less to do with the union's opposition to de Blasio's plan to entice the DNC to Brooklyn in 2016 and more about Bratton's support of body cameras on officers, his public assessment that Eric Garner was placed in an illegal chokehold, and what they see as his eagerness to placate a mayor with a liberal agenda.

To combat Mullins's flawed narrative, Bratton assembled his chiefs to point out that compared to last year, crime overall is down 3%, transit crime is down 14%, and murders are down 13%. Shootings have spiked by 9%, and grand theft auto has increased, but "robberies are down across the board."

Chief of Patrol James O'Neill announced that the department's "all-out" initiative this summer, in which hundreds of desk officers were placed on patrol duty, and hundreds more were assigned more overtime, prevented 11 murders, 194 robberies, and 394 other index crimes.

The commissioner also reminded the assembled reporters of his illustrious past, by invoking the September 2, 1990 stabbing death of Brian Watkins, a tourist from Utah who was killed on the subway platform by a group of young thieves Bratton referred to as a "wolfpack."

"It was effectively the beginning of the New York turnaround, the New York miracle," Bratton said, referring to a 1996 Time magazine cover story on his methods. "This coming September 2nd I'd have you just think of that day and the death of that young man, both for the symbolism and the reality of what that death meant to the city…That death was not in vain."

I'm quite proud of the NYPD. This is & will remain one of the safest city's in the world. http://t.co/iwwtA8WM4n pic.twitter.com/9Wczbi8ivy

Bratton later turned sardonic when a reporter pointed out a poll showing that the public supported Broken Windows policing.

"Surprise surprise," Bratton said. "I've known it for 25 years I don't know why the media's having such a hard time understanding it. You ride the subways, you walk the streets, you use the parks."

He also rejected the idea that we should be concerned about the staggering racial disparity in those arrests for low-level offenses. 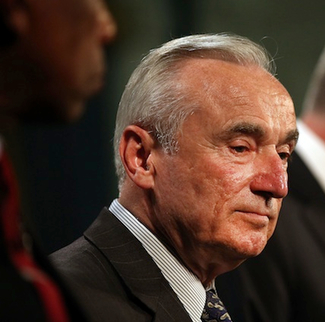 Curiously, Bratton cares about what the public thinks of Broken Windows policing, but not what they think about him.

"I'm the police commissioner of the City of New York, I'm not an elected official," he said, when a reporter asked about his low personal approval rating compared to Ray Kelly. "So the poll numbers relative to my popularity, et cetera, are really not of any consequence to me."

We asked the commissioner if low-level marijuana arrests were down compared to June, in which they were slightly higher than last year's figures and also higher than during Giuliani's time as mayor. Here was Bratton's response:

"Overall trending on marijuana related issues in the city is in fact down, it will continue to go down, we're looking at a number of additional initiatives as we go forward. So they're down significantly from what they were in terms of the overall narcotics enforcement of the city as it relates to marijuana-related types of offenses."

#Bill Bratton
#broken windows
#New York Miracle
#nypd
#original
Do you know the scoop? Comment below or Send us a Tip
A new Gothamist is coming! We’ve moved comments over to our beta site. Click here to join the conversation and get a preview of our new website.