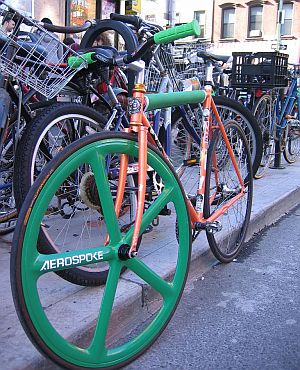 Bike thieves in New York have been known to use everything from electric saws to Bic pen tops in order to separate bikes from pesky locks, but no method is more effective than convincing a cyclist to just hand over their ride.

This is what happened to BikeBlogger Michael Green yesterday when, outside the eco-friendly Birdbath Bakery, he let a smooth-talking grifter talk him out of his beloved KHS (pictured):

A Hispanic male about 5'8, stocky, short cropped hair, looking kind of pale like he was on the methadone program. He was fit. A good 250 lbs. Wearing a white button down short sleeved shirt with a huge airbrushed image of scar-face. Jean shorts, white sneakers. He had some religious tattoos including a cross on his hand that looked home-made.

He walked by me, then turned around and came back. He walked up to me and asked where he could get a bike like mine. Then he asked if he could feel how heavy it was. I knew he was going to want to try it out and I knew I would SAY NO! Then for some dumb ass reason, I gave in and let him ride it.

yoink. Green summoned the NYPD and rode around with them in a fruitless search for the culprit, to no avail. So he’d love it if people would keep their eyes peeled for it; in the meantime if anyone wants to “try out” his sneakers or wallet or anything...