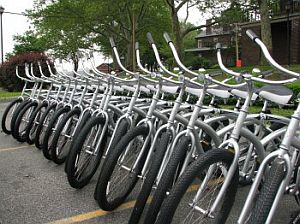 A new bike sharing program on Governors Island has proven so popular that the DOT is considering ways to implement a similar program throughout the rest of the city. Transportation Alternatives is reporting that since launching “Free Bike Fridays” on June 6th, bike ridership on the island has more than tripled, from 120 daily bike renters to more than 400. On weekends, rentals are available for $5 for 30 minutes, which gives cyclists enough time to pedal the circumference of the island.

The DOT is now seeking proposals for a citywide bike share program, which has been successful in Paris. The program would enable riders, for a small fee or annual membership, to access a bicycle at a bike station (normally near a mass transit hub) and then return it to other stations in the system. DOT Commissioner Janette Sadik-Khan said bike sharing is integral to the city’s goal of doubling the number of bicycle commuters:

New York is a world-class city for biking, and we are looking to build a world-class bike network. The number of bike commuters has increased 77% since 2000. We now have more than 300 miles of on-street bike lanes, more than 5,000 bike racks, and have distributed more than 15,000 bicycle helmets.

In the short term, the city is working to provide free bicycle rentals in August at Summer Streets to encourage cycling along 90 blocks of car-free streets. And starting today, the Forum for Urban Design is launching a five-day bike share. From now until Monday, free bikes will be available at four locations downtown; attendants provide helmets, ask that riders sign a waiver, and get credit card information to discourage theft – which is a smart move considering how quickly borrowing can turn into keeping.

#bicycle
#bike share
#cycling
#free
#governors island
#new york
Do you know the scoop? Comment below or Send us a Tip
A new Gothamist is coming! We’ve moved comments over to our beta site. Click here to join the conversation and get a preview of our new website.