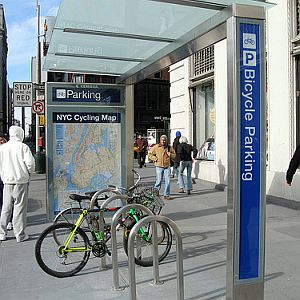 Not-so-fun fact: According to the city’s DOT, it’s illegal to lock you bike to anything other than a bicycle rack. Thankfully, it’s not a law that seems to be enforced, but anyone who’s commuted by bicycle long enough will have the experience of finding the sign you locked your bike to removed so workers can tear up the sidewalk.

The problem is that there are now approximately 131,000 cyclists in New York City and only about 5,000 bike racks. (The city plans to install 1,200 by 2009.) Today the Times talks to Manhattan bike commuters who are frustrated with their buildings’ refusal to let them bring their bikes inside. A group of cyclists who work at Rockefeller Center couldn’t even get a meeting with the building’s management, Tishman Speyer, to discuss the issue; their spokesman dryly tells the Times: “Bicycle racks are available outside for the convenience of bike riders. Bicycles are not permitted inside, for the safety of all our tenants and visitors.”

Mayor Bloomberg and city councilman David Yassky are both advocating proposals that would require commercial buildings to provide bike parking "on or near the premises." In the meantime, some cyclists worried about theft work out deals with business owners to let them stash their bikes in the basement. Transportation Alternatives has an index of garages that offer bike parking, Times Up also takes a look at the situation, and here are a couple videos on how not to lock you bike on the street.

Photo of the Union Square bike shelter, one of 37 the city plans to install by 2009, courtesy AllWaysNY.