A bike messenger was struck and killed by a hit and run truck driver in Flatiron this morning.

According to a police spokesperson, officers responded to a 911 call of a bicyclist struck at around 9:25 a.m., and found an unconscious woman in the middle of 6th Avenue near 23rd Street with head injuries. The cyclist later died of their injuries at Bellevue Hospital; the victim's name is being withheld until the police notify their family.

"[The driver] initially left the scene, but it's unknown whether he knew that he hit her or not," the NYPD spokesperson said, adding that the driver has been located, and that the investigation is ongoing. 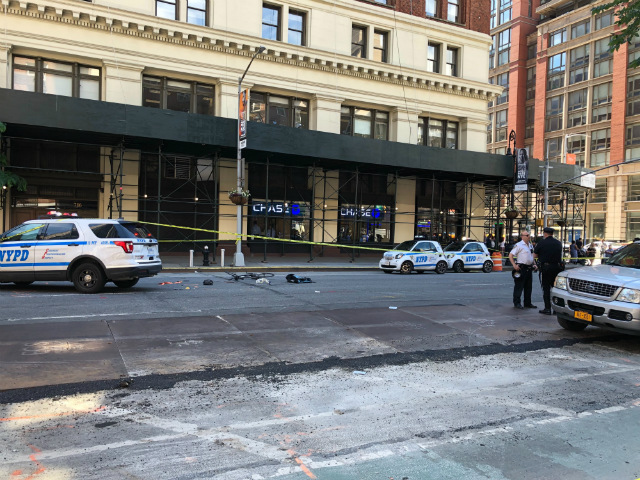 An employee for Samurai Messenger Service confirmed that the cyclist had "just started" there, but declined to comment further.

Jermaine Torres, a bike courier who works for Postmates and Uber, claims to have seen the crash.

"She was riding, she was taking a turn onto 6th Avenue and she was hit. [The driver] kept going immediately," Torres said. "Please, drivers need to be more aware of what they're doing and where they're crossing. This is ridiculous. We need safer streets."

A group of bike messengers and friends of the victim gathered near the scene of the crash soon after it happened, and confronted a truck driver who police were interviewing down the block before officers intervened.

An employee of A&E Stores said that there had been an "accident" involving one of its trucks but refused to comment further. "I have nothing to do with operations, I do real estate, I do financial numbers," the person said, before hanging up. 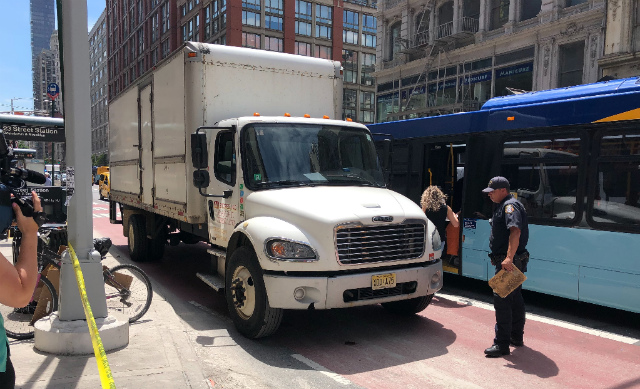 Streetsblog spoke to the driver:

The driver of the truck, Antonio Garcia, later told Streetsblog that he returned to the scene of the crash later, after a passenger in another car told him he had hit someone. Police interviewed Garcia, who later said he was not in trouble and was not issued any summonses, despite the fatality.

He said this crash was his first “accident” in 14 years as a driver for the company. He claimed he did not feel the impact of the crash. The passenger in the truck also used the term “accident” to describe the crash.

“We didn’t know we hit someone,” he said, employing the magic words that have often helped killer drivers avoid charges. “We went back after people started yelling at us.”

Twelve cyclists have died in traffic this year so far, according to the NYPD, two more than in all of 2018. Today's crash marks the second bike messenger killed by New York City drivers since Aurilla Lawrence was struck and killed by a hit and run driver in Williamsburg in late February. Police have still not made any arrests in Lawrence's case.

Preliminary statement from us on the cyclist killed by a truck driver this morning near 6th Avenue and 23rd Street in Manhattan: pic.twitter.com/M89P9Q9FYq

A delivery cyclist who goes by Rabbit said he raced with the victim of today's crash every Sunday at the Kissena Velodrome.

"[The victim] is a safe cyclist, she always wore a helmet, she was incredibly careful on the street because she raced, she didn't want to be out here swimming with these sharks," he said. "Too many friends are dying. I don't want to quit cycling, it's our life."

Mario Sepulveda, 20, said he no longer works as a messenger, but is still part of the community. "How you expect us to commute safely, we can't even ride in the streets without feeling threatened by these drivers," he said. "It's hard to ride your bike in the city."

[UPDATE / 4:43 p.m.] In a statement, the NYPD says that a "preliminary investigation revealed that the bicyclist and the truck were traveling northbound on 6 Avenue when they collided. The 54-year-old male operator of the vehicle was issued 5 summonses at the scene."

An NYPD spokesperson could not say what those summonses were for. The identity of the cyclist is still being withheld pending family notification.

Correction: An earlier version of this story said the cyclist was struck "south" of 23rd Street on 6th Avenue, when in fact they were struck on 6th Avenue between 23rd and 24th Street.

#cycling fatalities
#cyclists
#vision zero
#original
Do you know the scoop? Comment below or Send us a Tip