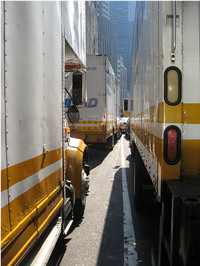 The existence of dedicated bike lanes are a sought-after city feature by New York's cyclists; but even when they appear they're often blocked by delivery trucks and drivers who remain oblivious to their existence. While Mayor Bloomberg has attempted to discourage drivers--or cash in on them--in the city with congestion pricing, the mere existence of bike lanes apparently does little to prevent drivers from owning the roads. The Times looks into the conundrum of bike lane non-compliance today.

Although city regulations forbid cars from blocking bike lanes — a violation that carries a $115 fine — those rules are routinely ignored by drivers who use the lanes as parking spots, loading zones and places to pick up passengers. Such maneuvers have enraged cyclists who say they are unlawful, rude and dangerous.

recently featured some video from online magazine Slate, which set out to identify the stupidest bike lanes in America. Slate's conclusion: don't rely on a thin stripe of paint to protect you from idiotic or disrespectful drivers. For those who imagine that Europe is a halcyon haven of bike friendly traffic design, the Slate video has multiple examples to the contrary.