Bike Lane Will Lose Protection On Pedestrian-Heavy Stretch Of Broadway

The bike lane that cuts along a stretch of Broadway between 42nd Street and 35th Street isn't exactly one of the DOT's triumphs. Immersed in a stretch of open pedestrian plazas, the lane has a funny way of luring oblivious pedestrians into the path of speeding cyclists, and seems highly accident-prone. Now, in response to community input, the DOT wants to dramatically rejigger the layout of the seven block stretch, moving the bike lane from its current position on the east side of Broadway and over to the west, with motor vehicle traffic.

The proposal [pdf] would expand the pedestrian plaza area while changing a moving/parking lane into strictly a parking lane. This would reduce Broadway from two southbound moving lanes to one. (Somewhere in midtown, Steve Cuozzo is having hot flashes.) In the proposal, the DOT anticipates questions about why it can't just relocate the bike lane within the plaza; the department explains that including a necessary "door zone" next to the bike lane would take away too much pedestrian space. And they also need space for a fire zone. Not to mention spots for NYPD parking. 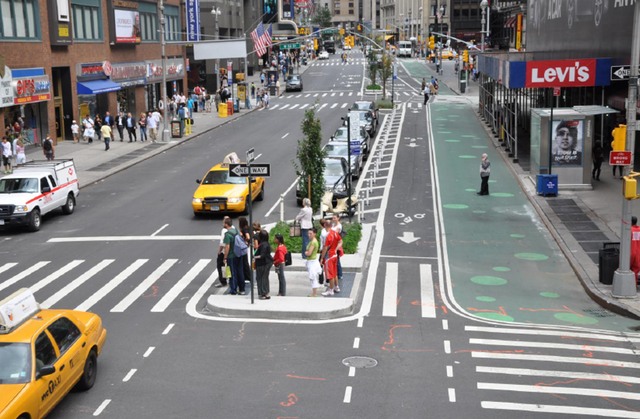