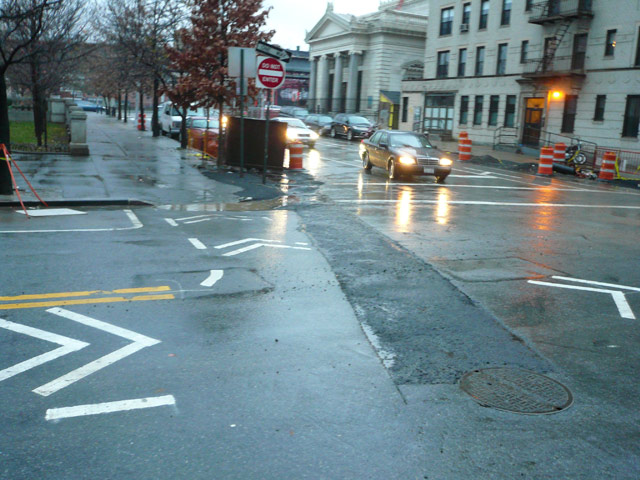 [UPDATE BELOW] Is a recently installed bike lane on South 4th Street in Brooklyn—yards from the northern pedestrian/bike entrance to the Williamsburg Bridge—misguiding cyclists onto the sidewalk and into the waiting arms of ticket-writing cops? A reader writes:

"As I reach the corner of South 4th Street and South 5th Place, just one short block away from one of the Brooklyn entrances to the Williamsburg bridge, I see that the bike lane arrows turn and point to the sidewalk. I thought it odd but I followed it knowing that it was just a short bit away from the entrance. 3/4 ways down the sidewalk I get stopped by 2 cops telling me that I can't ride on the sidewalk.... And then they proceed to give me a ticket!

Is this some kind of entrapment? The bike lane arrows clearly point toward the sidewalk and there is no sign telling you to get off and walk your bike. While they were in the middle of giving me a ticket, a girl on a bike comes up behind me and they stop her and give her a ticket for the very same reason. And she had the same complaint I did; she was just following the bike lane arrows that pointed to the sidewalk."

UPDATE:DOT spokesman Scott Gastell tells us: "We are in the process of designating the sidewalk along South 5th Street as a shared bike/pedestrian path. We will soon add appropriate signs and directional bike stamps along the sidewalk (see example), and we are reaching out to the local precinct with additional details about the project, which is not yet complete."

It's interesting to note that South 5th Place is only a half-block long and runs north, away from the pedestrian entrance to the bridge. So it's understandable that cyclists might assume the city was making an exception to the sidewalk rule here for the 50 yards or so leading up to the bridge; if one were to follow the letter of the law and not pedal against traffic on South 5th Place, it would be necessary to continue west to Driggs, then loop around the block and back up South 5th Street.

Wiley Norvell of Transportation Alternatives adds, "The sidewalk borders Continental Army Plaza, which most pedestrians prefer to use (if for no other reason that you can walk diagonally across it and save time). Overall, this is a good, necessary set of markings... A cyclist was killed at this location back on 2007 (I think, or possibly 06), and I regard it as one of the more dangerous parts of the north Brooklyn bike commute. All the paint puts everyone in their own lane and makes it a lot safer. And once again, shame on the NYPD for ticketing this cyclist."

And technically, it's also necessary to ride onto the sidewalk, albeit briefly, in order to access the bridge pedestrian ramp. Which begs the question: Where does the sidewalk end?