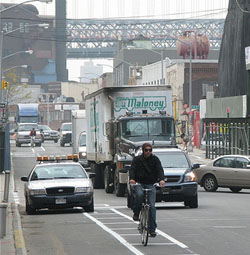 We continue to receive emails about the controversial Kent Avenue bike lane in Brooklyn, which has become the front line in the battle over bike lanes. On one side are business owners and residents who insist that the new "No Stopping" signs on Kent, installed to accommodate the bike lane, are onerous; on the other side are cyclists who enjoy the sense of a safer commute between north and south Brooklyn, and cherish the hope for a Brooklyn Greenway completely separate from traffic. Here's an email in response to yesterday's story about a cyclist who says Hasidim in South Williamsburg are making good on their promise to obstruct traffic in protest:

Things have gotten pretty terrible in the saga of the Kent Ave. bike lane, at least for the people who live or work on this block. Today I had to drive home my 5 year old daughter from hospital, after she went through surgery last week, it was 6 p.m. when we arrived in front our home at 450 Kent Avenue and it was freezing cold outside, after driving around for 15 minutes, I finally found a halfway illegal parking spot 4 blocks away from my home, I had to walk with my cranky just out of hospital daughter in my hands, all while she was complaining why I had to park so far.

This is 1 of 100 such stories that happen every day here on our block. Now back to the issues: we lost over 100 parking spots, there is no way to pick up/drop off a passenger or make a delivery in front of our house, buses cant stop to pick up kids, you cant call a car service to your house, and all you had to write was Hasidic chickens and Hasids Say Cyclists Too Sexy for Bike Lanes. I want to invite you to my house, and give you a consignment, come with your car, find a legal parking spot within 5 blocks of my house, walk down to our building very slowly and count how many bikes pass by. I bet U, it wont be more then 1.

On the other hand, anyone who rides a bike through South Williamsburg—or anywhere in NYC—knows that buses and other vehicles routinely block the bike lanes, with little enforcement from the NYPD—who in fact are among the city's most shameless bike lane blockers. Nevertheless, community pressure has become so intense that Councilman David Yassky, Borough President Marty Markowitz, and other officials want the DOT to paint over the bike lane on the northbound side and to remove the "No Stopping" signs on the east side of Kent Avenue, "until such time as an appropriate community-endorsed solution can be developed."

Their full letter to the DOT is published after the jump. And in still more NYC cycling news, City Room reports that yesterday the City Council discussed two bills: One that would mandate access to bike parking in most office and retail buildings, "provided that such building can reasonably accommodate the storage of such bicycle," and a second that would require garages and parking lots to provide at least one bicycle parking space for every 10 car-parking spaces. But a representative of city building owners, Sylvester Giustino, urged caution, wondering how the city expects owners to "screen bicycles and bicyclists for terrorist activity."

Increasing the availability of bicycle lanes throughout New York City is a critical goal that we share with the NYC Department of Transportation (DOT). That said, we strongly believe that this goal must be balanced with an appropriate consideration for the local businesses, schools, and residents that stand to be most affected by the installation of these lanes. We write to express our concern that these considerations were not appropriately balanced when DOT installed the two-way bicycle lane on Kent Avenue. This has created an adverse and unnecessary impact on residents, local businesses and bikers alike.

Since the installation of this lane and the accompanying “No Stopping” signage, businesses that rely on their ability to load and unload on Kent Avenue have been forced to risk both physical danger and repeated fines. Many of these businesses are dependent on retail customers who can no longer find parking to do their shopping. Repeated requests to find an effective and immediate solution for these businesses have been ignored by DOT or have not been met with the urgency that the situation warrants.

In addition to the businesses along Kent Avenue, many local residents have been affected by the sudden change in parking regulations. The resultant loss of parking in an area that already faces a parking shortage has forced families to park far from their homes and has impaired their ability to drop their children off at school, receive deliveries, and load and unload passengers in front of their homes.

In light of the difficulties and inconveniences that have resulted from the installation of the bicycle lanes on Kent Avenue, we respectfully ask that DOT remove the newly installed “No Stopping” signs from the east side of Kent Avenue and that you paint over the northbound bike lane until such time as an appropriate community-endorsed solution can be developed.

We are deeply troubled by the negative effect that this effort has had on the Greenpoint/Williamsburg community’s opinion about bicycle lanes and biking, which are a critical part of the North Brooklyn community. We affirm our enthusiastic support for the Brooklyn Greenway, and we hope and expect to see the Kent Avenue bike lanes, which greatly increase bicyclist safety, return once the DOT and the community have developed a collaborative plan. Until that time, we feel it is unfair to leave the bicycle lanes as they are.

Please do not hesitate to reach out to our offices with questions.