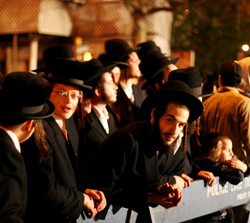 The battle over bike lanes is heating up, with members of the Hasidic community in South Williamsburg vowing to block traffic in protest against a new bike lane on Kent Avenue. You'll recall that some of the opposition has to do with the increasing number of female cyclists riding through the neighborhood wearing immodest clothing. The Hasidim are also fuming over a parking ticket blitz last October when, to make way for the bike lane, traffic cops enforced a new change in parking rules on Shabbos, when Orthodox Jews don't operate machinery.

Now, after what the Brooklyn Paper describes as a "contentious" neighborhood meeting hosted by Councilmembers David Yassky and Diana Reyna, Satmar spokesman Isaac Abraham has announced that private buses will intentionally obstruct Kent Avenue to pressure the city to remove the bike lanes and reinstate alternate-side parking:

"We will ask all the drivers: ‘When you pick-up or drop-off our children, put your bus in an angle, block the entire street, wait ’til the parent gets to the door of the bus, [and] slowly — very slowly — take your child off or put it on the bus, [and] don’t rush to get back on the sidewalk. One day the traffic will be backed up all the way to Long Island City to [the] Department of Transportation Headquarters, traffic will come to a halt."

Satmar community members say the no-stopping, no-standing signage on Kent is hurting their businesses, and they're not the only ones objecting. Even goyem business owners like Justine Franko, owner of the furniture and home furnishings shop Om Sweet Home, say the bike lanes are discouraging customers who can't find parking. Franko tells Brooklyn Paper that during a typically strong week in mid-November—when she could usually count on between $1,500 and $2,000 in revenue—she earned only $200. She says she's "mortified. If things don’t change, I won’t last six months."

At the Monday night meeting, DOT Bicycle Program Coordinator Joshua Benson told community members that "change is hard, and when we change the way the streets work, there is always an adjustment period." And DOT spokesman Scott Gastel said his agency may consider altering some of the new parking restrictions. (Streetsblog has a report from the meeting.)

Abraham promises the protests will occur every morning from 8–10 a.m. and 4–7 p.m. and will be accompanied by rallies. Local resident Leo Moskowitz tells Brooklyn Paper, "I don’t like it, but if that is what needs to be done to get their attention, people are going to do it." Little Italy business owners opposed to the new Grand Street bike lane will surely be watching to see if this tactic works.