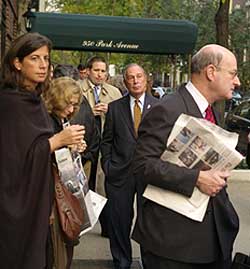 It's believed yesterday's presidential election had the biggest voter turnout since the 1960 election: American University's Center for the Study of the American Electorate director Curtis Gans "predicted that as many as 135 million people would cast votes - 64.8 percent of those eligible to vote, compared with 67 percent in 1960."

However, the excitement of high voter turnout and a thrilling presidential race is tempered by the long lines many faced. NYC voters saw long lines, broken machines and their names missing from the voter books even though they'd been in the books in previous elections! And even the famous had to wait: With 270 people ahead of him, Mayor Bloomberg waited in line to vote on the Upper East Side (he joked he couldn't cut because the press was around).

When NY Governor David Paterson voted in Harlem, he said, "I haven’t seen lines like these even when the machines were broken." Rep. Anthony Weiner was luckier--it took him 10 minutes to vote at P.S. 101 in Forest HIlls. The NY Times reports that the NYC Board of Elections "acknowledged the complaints, which [were] attributed in part to 'an unprecedented number of voters at the polls.' The city’s 34,000 poll workers, who are paid $200 to $300 for a day’s work, tried their best to help voters at 1,351 polling sites." A Times editorial suggests that more stats offer early voting or allowing absentee ballots that don't require excuses.