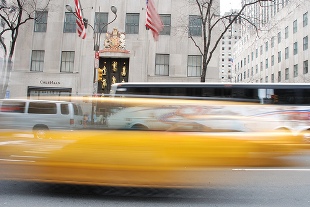 City Council member Gale Brewer criticized the Taxi and Limousine Commission's disorganized lost and found process and urged the TLC to make some changes. Brewer said, "A New Yorker misfortunate enough to lose her property in a taxi is more likely to find overwhelmed hotlines and contradictory instructions than she is to recover her missing possession. The TLC procedure is rarely followed and is hopeless without a receipt. The TLC’s system does not work, if it could even be called a system."

Here's some of what's wrong with the system, according to Brewer's report:

- The TLC hotline is understaffed. The staff made six attempts to contact the TLC through the hotline from June 13 through June 19. The minimum time on hold was ten minutes, and staff only reached an operator twice.
- Passengers without taxi receipts are to call each of the eight police precincts designated for lost property.
- Officers at the designated precincts are generally uninformed about the TLC’s policy. Staff at the 17 Precinct in Manhattan, one of the designated precincts, was unaware of any TLC designated precincts.
- A lot of lost property is not taken to the precincts, but is instead left with the taxi garage managers. As of June 20, the 107 Precinct in Queens had not had any items brought in for at least two months.
- There is no way to contact the garage without a receipt.
- When or if items are brought from the garage to the precincts, the passenger may already have called the precincts and found nothing.
- The NYPD’s organizational system for lost property requires physically searching for an item, as there is no computerized database.

It's true -filling out the TLC's Lost Property Inquiry form is like yelling into a vast canyon. Which is why one of the two things you should do when you ride in a taxi is get a receipt so you have the cab's medallion number (the other thing you should do is buckle up).

The TLC is planning on introducing GPS systems in yellow cabs later this fall, which would help passengers locate lost items more easily.