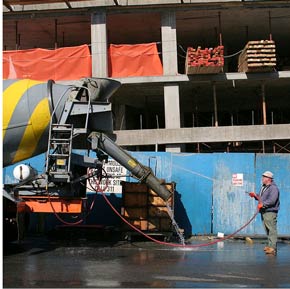 The new Yankee Stadium, Second Avenue subway, Citi Field and Freedom Tower are just some of the projects whose progress may be delayed a little more due to a strike by cement trucker drivers.

Local 282 represents about 400 truck drivers, who bring cement to the various building union sites in the city. The NY Times reports that the concrete companies were caught by surprise when the union decided to strike a half hour after the midnight deadline passed last night (the two sides could not agree on wages or working conditions).

John Quadrozzi of the Quadrozzi Concrete Corporation said, “At a time when the city is complaining about construction being behind at the World Trade Center site and the economy being in a downturn, we feel it’s not the right time for the union to take such a strong position in this type of negotiations.” And Association of New York City Ready Mix Concrete Producers' Joseph Greco Jr. said, "The union has informed us that they will not be contacting us to have additional negotiations until next week. "

However, a lawyer for the union said it "fully intends to continue negotiating in good faith and looks forward to reaching an equitable resolution to this dispute so that its members can return to work as soon as possible." There are a lot of projects in NYC over the next few years requiring union labor--check out these charts.