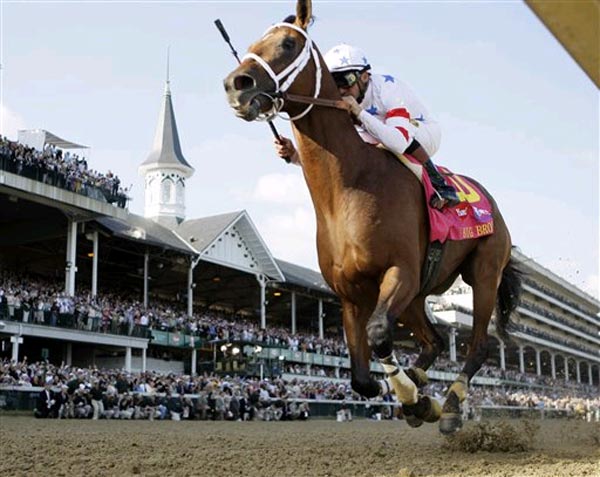 Big Brown fulfilled his role as the favorite, winning yesterday's 134th Kentucky Derby at Churchill Downs by four and three-quarters lengths. But the victory of Big Brown and jockey Kent Desormeaux was overshadowed by the death of the second place finisher, Eight Belles. 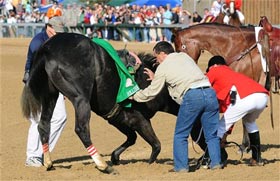 The female horse was also favored in the race, but when the race was already over, the horse fractured both front ankles. After a veterinarian examined her, Eight Belles was euthanized in front of the crowd of 157,000 spectators, recalling Barbaro's injury at the 2006 Preakness.

As for Big Brown, his co-owner, Michael Iavarone, of Holbrook, Long Island, worried about Big Brown's pace early on, but trainer Rick Dutrow reassured him the horse was "perfect." Iavarone said, "I've got to go with what Rick says now. Rick's word is God for me."

And Desormeaux, who has won the Derby twice before with different horses, sang Big Brown's praises, "Talentwise, he's the best horse I've ever ridden. He has stamina, and he has multiple gears. This is what only Derby winners can do. They can move you into a position, and then cruise, and then take you into another position and then cruise again. Every time I ask him to run, it's like leaving the starting gate again."

Big Brown had only three prior starts before yesterday, although his margins of victory were significant in all of them. It's the first time since 1929 that a horse running from the far post position has won the Kentucky Derby.

#eight belles
#euthanized
#Kentucky
#kentucky derby
#louisville
#Racing
Do you know the scoop? Comment below or Send us a Tip