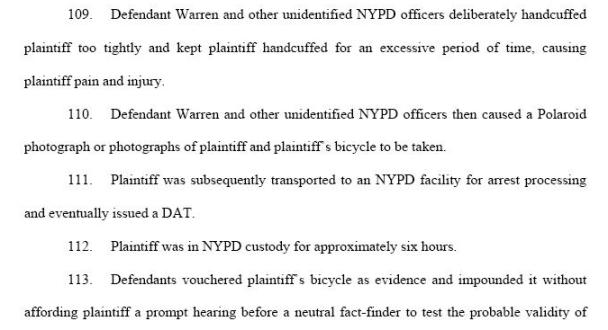 People may be talking the 2008 Presidential election, but when it comes to NYC, the aftermath of the 2004 Republican National Convention is still being felt. It was right before the convention when the NYPD arrested over 200 bicyclists during the August 2004 Critical Mass ride, starting more heated of NYPD vs. Critical Mass clashes.

Yesterday, a number of bicyclists sued the city over their arrests during the October 2004 Critical Mass ride. The city tried to block the ride by demanding the unorganized ride needed a permit, but a judge ruled the ride could go on and that the police could not seize bikes ("as long as the owners have not been charged with anything and unattended bikes do not block vehicles or pedestrians"). Still, 33 people were arrested, and 15 are now plaintiffs against the NYPD and city.

onNYTurf has the 39-page PDF of the lawsuit and summarizes some of the charges, including the creation of false information provided to the DA's office, failing to turn over exculpatory evidence, and lacking probable cause to continue the criminal proceedings. The plaintiffs are each demanding $5 million in damages.