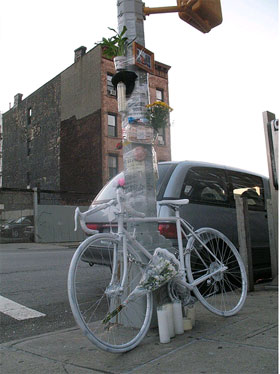 Last night, a memorial bike ride was held in memory of Craig Murphey. Murphey, a 26-year-old who worked at the West Harlem Action Network Against Poverty, was biking when he was hit by an oil truck at Union Avenue and Ten Eyck Street in Williamsburg.

The truck driver was not charged, and an earlier report had stated that Murphey was biking in the "wrong direction" (opposite of street traffic). However his friend Elizabeth Weinberg told Streetsblog:

We know for a fact that he was coming from Lorimer (at Broadway) at that time (dropping off our friend) and heading to his place on South 3rd in Brooklyn, so he had to have been going NORTH on Union Ave, not south like the police report said. There is no way Craig would be riding against traffic and he had no reason to head back down in the opposite direction from home. He rode to work everyday in Harlem from Brooklyn; he knew what he was doing.

A ghost bike was also placed at the intersection. There will be a candlelight vigil for Murphey tonight at 9PM at Macri Park; more details at Williamsboard.

There's a page about him at LoveBryan and there's a Flickr pool of Craig Murphey photos. Murphey had a photoblog, LOOK IT and a MySpace page.

And many people have been demanding that the city work on "street and signal engineering, agencies jurisdiction, enforcement and traffic safety laws, reporting traffic problems and police procedures in accidents," but not much has happened.

Photograph of Craig Murphey's ghost bike by elizabeth weinberg on Flickr; she also has a set from the memorial ride