Hundreds of warehouse workers employed by the electronics and photography company B&H Photo Video launched a one-day strike Monday, May Day, demanding that their employer roll back a plan to relocate roughly 330 Brooklyn jobs in Bushwick and the Brooklyn Navy Yard to a new facility in New Jersey.

The move was formally announced in January, in the midst of union negotiations. Workers and their union representatives allege that the relocation is a tactic to stifle their campaign for higher wages and safer working conditions.

"Before, in our job, they had us like we were in prison," said Isais Lopez, a 28-year-old shipping processor. "They obligated us to work sixteen, eighteen hours [per day]. So we got together to do away with that. But the consequence of all of that [organizing] is they found a place and strategies to move to New Jersey."

Workers have said the move is untenable, since the new 5,000-square-foot factory in Florence Township, New Jersey will not be accessible by public transportation. The company confirmed to Gothamist that it will not be providing transport.

"We don't want to be left without a job because we have families," Lopez added. "We have made our life here in New York. Our families could get divided up."

Workers formed a picket line on 34th Street and Ninth Avenue shortly after 10:00 a.m. on Monday, with allies from Immigrant Worker Justice and the Democratic Socialists of America, among others. Marchers shouted "What's disgusting? Union busting!" and carried signs demanding that B&H keep jobs in New York City.

A spokesman for B&H told Gothamist that the company's Brooklyn Navy Yard lease expires in 2018 without a renewal option, and that the company had actively been seeking a new warehouse location before union negotiations began. According to Crain's, an Upstate New York location was under consideration in 2013. David Ehrenberg, head of the Brooklyn Navy Yard Development Corporation, told DNAInfo this year that a movie studio has signed on to take over the space.

"We just had to keep drawing larger and larger circles, and we ended up in Jersey at the end of the day," said spokesman Michael McKeon. "We've invited all of the workers to come to New Jersey. We've invited the union to come."

But United Steelworkers has said that the news of the move was "totally unexpected," and effectively ground negotiations to a halt. The union has since filed a complaint with the National Labor Relations Board.

"Moving to South New Jersey will make it difficult, and certainly a challenge, for employees currently relying on public transportation to accept employment offers at the new site," said USW District 4 Director John Shinn in a statement. "This is clearly an illegal tactic designed to avoid the company's obligation to bargain in good faith." 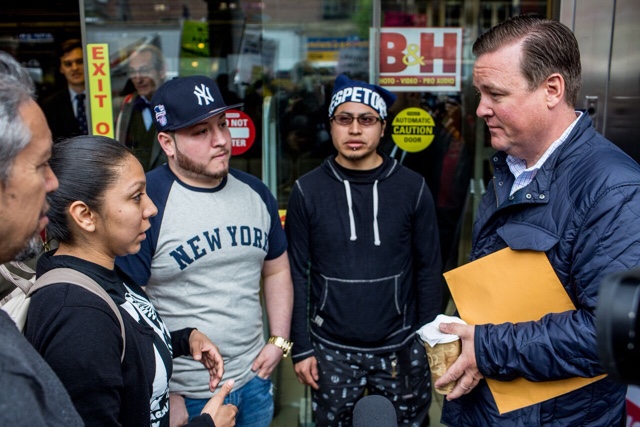 B&H workers voted to unionize in the fall of 2015, following years of alleged labor abuses detailed in a Department of Labor administrative lawsuit.

Hispanic workers were paid less than their white counterparts at the Brooklyn Navy Yard facility, according to the DOL, and were relegated to separate restrooms and subject to verbal harassment. Previously, in 2007, B&H paid $4.3 million to Hispanic workers to settle a discrimination lawsuit filed by the U.S. Equal Employment Opportunity Commission. Four women employed by the company sued in 2009, alleging that Hasidic Jewish managers refused to promote women into sales positions for "religious reasons."

In 2016, Hyperallergic reported that the Occupational Safety & Health Administration (OSHA) had fined the company $32,000 for hazardous workplace conditions, including boxes stacked precariously high without guardrails.

Jans Sotto, 41, told Gothamist that he has worked at B&H for six years loading boxes, and has witnessed dangerous conditions and discriminatory practices. "The packages are stacked so high," he said. "The company pays the minimum for the Latinos. For the newest employees it's $18 per hour, for Latinos it started at $11. The company is racist."

Rosanna Rodriguez is an organizer with the grassroots Laundry Workers Center, which has been helping the B&H workers organize for two years. She said this latest news is particularly frustrating in light of the workers' recent successes.

"Things are getting better," she said. "We've had many victories during two years of campaigning. They [B&H] reduced the hours that they have to work. They fixed a little bit of conditions because of OSHA. But in the middle of negotiating they said they are going to move. All of these things we know are excuses. They are just a tactic to destroy the union."

United Steelworkers did not attend Monday's action. We've reached out to the union for comment and will update accordingly.

McKeon, the B&H spokesman, said that there have not been robust union negotiations with the Brooklyn warehouse workers since the news of the New Jersey move. B&H is negotiating more regularly with roughly 70 workers in the company's Manhattan warehouse, below the flagship store, which organized separately last February and will not relocate, he said.

The Brooklyn workers "have asked us some stuff about the move and the like," McKeon said. "But it's mostly been around the idea that somehow we can stay there. We're always open to talk, but there's only so much we can do."

During Monday's action, workers presented McKeon with a letter detailing grievances and demands. Allies plan to picket the store twice a week, on Fridays and Sundays, through May 14th.

"If you don't want this to continue happening, you need to respect what their demands are," said Cindy Martinez of the New York Workers Center Federation, translating from Spanish. "They don't want anymore lies. They want contracts and they want to keep their jobs. Along with [this] letter comes a lot of questions that you need to respect."

#B&H workers
#labor abuses
#union
#original
Do you know the scoop? Comment below or Send us a Tip