Governor Goodhair has decidedly taken the lead among GOP presidential hopefuls in the latest polls, despite the fact that all his fellow Republicans are really gunning for him. So now more than ever, Rick Perry needs to mobilize his supporters and pursue the endorsement of celebrity Republicans. He's needs a classy edge...and what is more classy than "yards and yards of gold silk"?

That's right: Perry sought out a little of that Bob Turner mojo and broke bread with professional used car salesman and one-time Republican demigod Donald Trump yesterday in Manhattan. But unlike his blue-collar pizza pow-wow with Sarah Palin, Trump spared no expense in wining-and-dining Perry at the fancy-shmancy Jean-Georges Restaurant. Look how sated and suited they are after their meal: 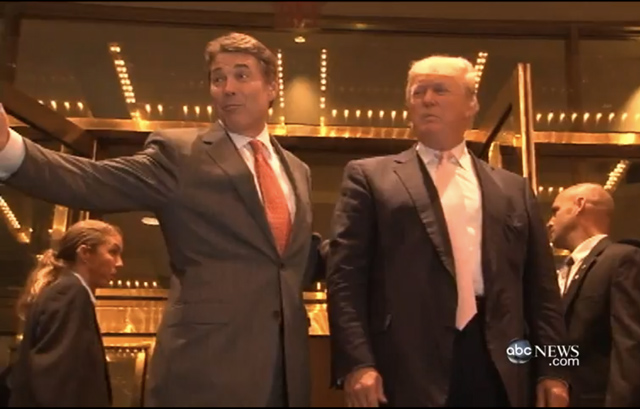 The two men had never met in person before (though Trump has said that Perry frequently calls him), but according to the Post, they "hit it off like gangbusters," chatting at Trump Tower for more than an hour, gabbing animatedly in their limo before dinner, and then feasting at the restaurant overlooking Central Park, from a menu which includes Fluke Sashimi with Floral Infused Cherries, Carmelized Foie Gras, and Crunchy Rabbit.

As for the meat of their conversation, CBS reports that Perry had requested an audience with Mr. "Enormous Balls": “It’s obviously about the presidency. Everyone wants Mr. Trump’s support,” said Trump spokesman Michael Cohen. But even is Trump likes the cut of Perry's jib, he still hasn't ruled out a last-minute run, if the people need him: "After The Apprentice is over in June, if he's still not happy with the choices, we are all ready to launch a campaign for him as a third-party candidate, as an independent," Cohen said completely straight-faced. We think he may have misspoke however: he probably meant that they would launch a campaign to COINCIDE with the season finale of The Apprentice, just like last time!

#donald trump
#election 2012
#gop
#manhattan
#president
#republicans
#rick perry
Do you know the scoop? Comment below or Send us a Tip