Beware the Gowanus Canal (or At Least Use Protection) 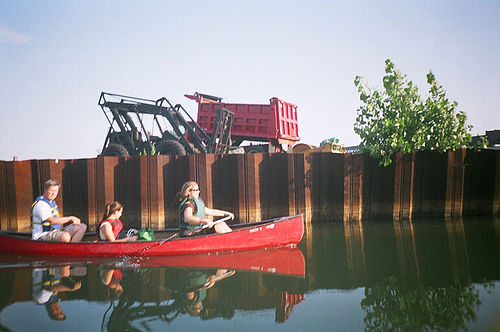 Green Brooklyn (via Brownstoner) has a not-surprising-as-it-should-be post on, well, the Gowanus Canal having a touch of the gonohorrea. According to a Scienceline article, "a biologist at the New York City College of Technology, has her students analyze water samples and observe the oily substance that coats the water’s surface each afternoon. 'One group of students found gonohorrea in a water drop,' said Haque. She’s particularly interested in fluorescent white gauze that lies near the canal’s bottom, and thinks that the substance is a colonizing life form that adheres to the contaminated sediments."

Suddenly looking at these recent photos of swans on the canal is less heartwarming. Green Brooklyn suggests writing a note to Bloomberg to make him aware of this, especially prior to the New York City Department of Environmental Protection's stakeholder meeting later this month.

In the meantime, you probably don't want to date anyone in the The Gowanus Dredgers canoe club.