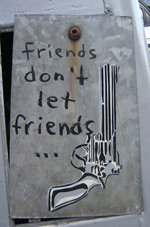 Cops may or may not have shot a gunman who was involved in a shootout in East Harlem yesterday. NYPD officers rolled up on a shootout in progress between two men who were arguing outside of a fast food restaurant soon after midnight this morning. Gunfire was being exchanged between the two men at 110th St. and 5th Ave. in Manhattan when police arrived. Although one of the men was eventually fatally shot by the other, a sort of outlaw solidarity took hold and both turned on the responding police.

The responding cops shot both men, and it's unclear whether the fatal shot came from the police or his original dueler. The second shooter is in critical condition after he was shot following a several-blocks-long chase. Two friends of the initial victim were wounded in the shooting, by his assailant, not the cops.