In his first major event in New York City since losing the state's Democratic presidential primary in April, Bernie Sanders rallied his supporters and encouraged them to keep their “sense of outrage” as they attempt to transform the Democratic party leading up to its convention in July. Sanders, who has not officially dropped out of the race, gave no indication that he would continue to seek the nomination, and pledged he would do everything in his power to help defeat Donald Trump.

Sanders also made no mention of Hillary Clinton, the presumptive Democratic nominee, during his 70-minute speech that his campaign had titled, “Where We Go From Here.”

Pledging to influence the Democratic party by pushing for the most progressive party plank in its history, Sanders told the enthusiastic crowd at Town Hall in midtown that “we’re going to open the door for ordinary people, for working people, and young people, rather than wealthy campaign contributors, to be running that party.”

Despite chants of “third party” and “never Hillary,” Sanders stuck closely to the topics that have energized his supporters, including the expansion of Medicare and the dismantlement of the big banks. He also continued to press his supporters to get involved in politics themselves, announcing that since a speech he made online last week, over 20,000 people had signed up to either run or help someone run for political office.

While expressing his appreciation for the small donations that drove his campaign, one supporter shouted from the crowd, “It’s because we love you, Bernie.” Sanders quickly responded, “But it’s not about me, it has to be about us!” 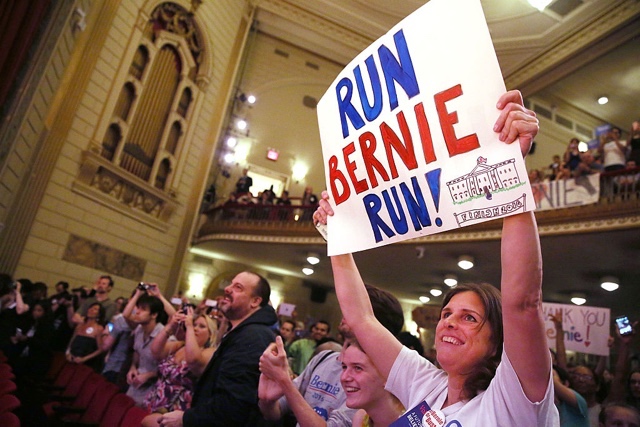 Before the speech, Sanders supporters seemed ready for some degree of guidance from the candidate. While very few conceded that Sanders no longer had a realistic chance of winning the nomination, many seemed encouraged by the impact their candidate had already made on the national discourse.

“I believe that Bernie has made a huge impact on the Hillary campaign. Had he not run, Hillary would not be so aligned with a good majority of the democratic voters,” said Parisa Vahdatinia, 31, who phone-banked for Bernie and attended his massive April rally in Washington Square Park. “I think her opinion has significantly changed about a number of issues—education, minimum wage, health care. So, even if he doesn’t win, even if he doesn’t become president or V.P., his impact will reverberate for every Democratic election from here on out.”

mad turnout for #bernie in #timessquare real change is gonna happen, it's just a matter of time!!! this ain't over it's just beginning!!!#powertothepeople once you #feelthebern you'll never return!!! 🔥👴🏼🇺🇸✌🏾️❤️🤓

Directly before Sanders jumped into an attack on Trump, the Vermont Senator indirectly pressed his former Democratic opponent on what might remain the largest policy difference between the two candidates—Clinton’s foreign policy. “If we have not yet learned the dangers of arbitrary regime change, then shame on us,” Sanders said. “It’s not enough to talk about overthrowing dictators, you have to be talking about what happens the day after.”

But Sanders soon pivoted towards a discussion of Trump, signaling that while he might never fully get behind the former Secretary of State (although he pledged to vote for her this morning) he would still make sure that his supporters steer clear of her general election opponent.

“It’s hard to imagine a man who has such limited capabilities being president. And it’s not just that this man wants to get hundreds of million of dollars of tax breaks and that he thinks climate change is a hoax. It’s even uglier,” Sanders told the crowd, who was booing at the very mention of Trump. “Think of the struggles that we have gone through as a nation. Hundreds of years fighting against racism, fighting against sexism, and this guy is making the cornerstone of his campaign his bigotry.”

On Wednesday, Trump reached out to Sanders supporters in an attempt to convert their dissatisfaction with the Democratic party into support for his own campaign.

Sitting in the third row, Yvan Mojica, of Forest Hills, was skeptical about Trump’s chances of winning over the Bernie crowd.

“I think he’s out of his mind. I don’t think that anybody who truly believes in the values that Bernie represents could possibly agree with anything that Donald Trump is saying or doing,” Mojica told Gothamist. “There’s too much negativity to his campaign, too much racism, and he represents the corporate elite, which is something we want to get far away from.” 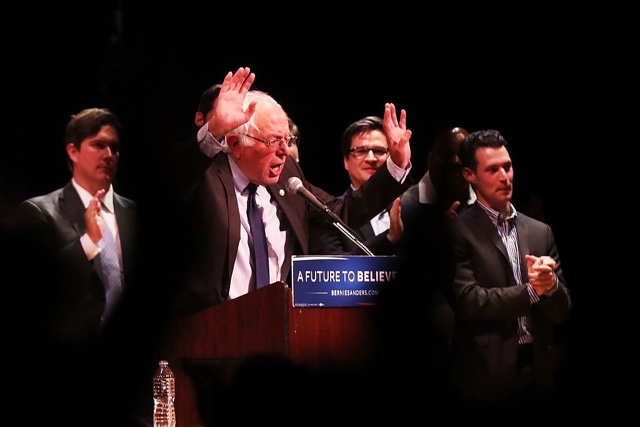 Sanders wrapped up his speech by calling again for his supporters to get involved in politics, and to keep the “revolution” going. “The struggle continues,” Sanders told the energized crowd before leaving the stage.

Outside Town Hall, campaign workers from several local races where Sanders has endorsed candidates raced to take down information and find voters in their districts. Brendan O’Neill, 23, of White Plains, wished that Bernie had been a little more concrete about what happens now and how they can continue to exert influence over the political machine.

“I feel like he covered a lot of bases, but he didn’t have a real focus,” O’Neill said. “Once the election is over, and once Hillary doesn’t need the half of the Democratic party that she doesn’t appeal to, the party will go back to letting these huge issues that Bernie brought up slide. They won’t need us anymore.”