Following up on his massive rally last week in the Bronx, Bernie Sanders hit his home borough of Brooklyn on Friday with a pair of stump speeches, first appearing outside of his childhood home in Midwood and then at a waterfront park in Greenpoint. Sanders is looking to continue his primary winning streak with a come-from-behind victory in New York state. Recent polls have him anywhere from 10 to 18 points behind Hillary Clinton, who served as the state’s senator for eight years.

"It’s good to be home, to come back to my old neighborhood," Sanders told the crowd at the first rally, in front of the apartment building at 1525 East 26th Street, where he lived for the first 18 years of his life.

"Right on this street, I spent thousands of hours playing punchball. Do they still play punchball?" Sanders asked the crowd in his deep Brooklyn baritone. 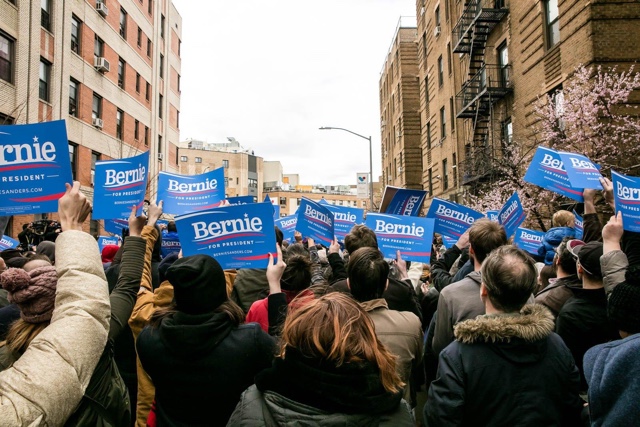 The event, held during a weekday afternoon, was smaller than Sanders's previous Bronx rally, but still pulled in hundreds of attendees despite the cold and wind. Many students from nearby James Madison High School, Sanders's alma mater, came to the rally after dismissal to show support for the school's onetime track captain.

"I just like that he understands that it’s not always about the rich people, that minorities need to be heard too," said Ronique Fletcher, a Madison student from Canarsie who attended the rally with a group of friends, including a Clinton supporter. "I had to drag her from the bus stop so she could hear Bernie speak, because her clouded mind is a detriment to society."

"I’m not ignorant," the friend responded. "I’m open to his ideas."

Attendees were largely young and reflected the demographics of the neighborhood, with minority students at the high school well-represented, along with students from nearby Brooklyn College and members of the area’s Orthodox Jewish community.

"I want to feel like I’m part of something bigger than myself, especially because he’s from the same town as me," said Adina Miles, 28. "I really want to see the playing field evened in the economy. I appreciate that he’s failed along the way, that it’s taken a lot of push, a lot of hustle. I see in him an entrepreneurial spirit that I admire, even if it’s not in the business sense. I see the rags-to-riches story in him, and that reverberates within all New Yorkers."

Sixty-nine year old Lois Pinetreee, who graduated from Madison a few years after Sanders and now lives in Brighton Beach, waited in line to see him speak. 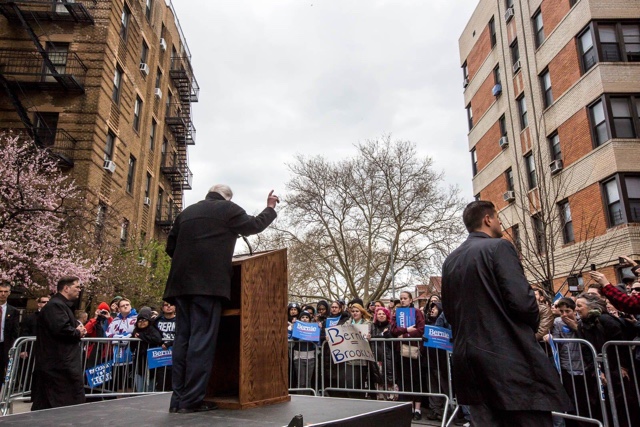 "I’ve been following Bernie for a long time," she said. "He’s always been on the side of the people, defending social security. He really knew what was going to happen in Iraq."

Pinetree doesn’t begrudge Sanders for leaving New York to take up residence in the crunchier confines of the Green Mountains: "I love Vermont, my cousin lives there. I go up there all the time."

Pinetree would like to see the campaign return to its more civil days, before the last week when Sanders began questioning Clinton’s qualifications for president and sharpening his criticisms about her connections to Wall Street.

Before Sanders spoke, he met with current residents of his childhood building, many of whom would watch the speech from their windows. Actor Mark Ruffalo warmed up the crowd for Sanders, encouraging New Yorkers to vote for the candidate they feel would represent the city’s diversity best.

"Because that’s what we are in New York, right? Just a bunch of mutts?" Ruffalo said. "We are America!"

Sanders then breezed through his stump speech, hammering on the issues of income inequality and the need to foment a "political revolution" to end establishment politics as usual.

"If you told anyone five years ago, that we would have minimum wage of fifteen bucks, they would think you were crazy! But you know what happened? Workers from the fast food industry had the guts to go out on strike and fight for their rights, and today in California, Oregon, New York, there’s a fifteen dollar minimum wage," Sanders told the crowd.

After Midwood, Sanders trekked across the borough to Greenpoint, where the wind lashed thousands who had gathered to see him speak at WNYC Transmitter Park on the East River. 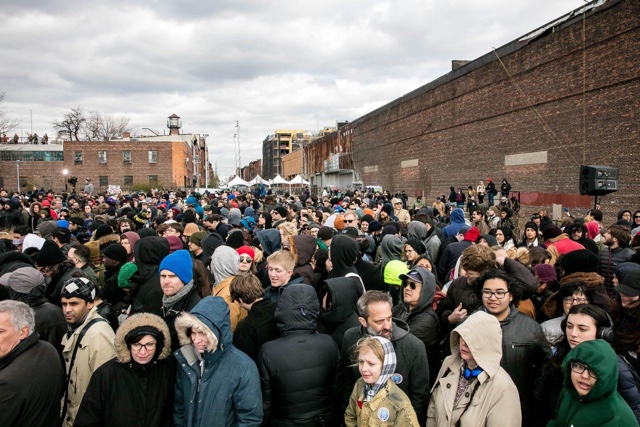 Gavin Compton and other employees at nearby Variety Coffee Roasters shuttled hundreds of free cups of coffee to people who had been waiting in the cold for hours to hear the Vermont senator speak.

"I grew up in Vermont, so I’ve been a Bernie Sanders fan since as long as I can remember, and we’re all just huge supporters of Bernie in the shop," Compton said. "I think fair pay is really important for the service industry."

Attendees included many more transplants to the city than the previous event.

Jarrett Kerr, who moved to New York 10 years ago and now lives in Crown Heights , believed that the rally was something that she’d remember forever, after having followed the primary process closely these last few months.

"It's really been a roller-coaster of emotions for me, from anger to frustration to joy. I'm really getting fed up with the fact that the media is still trying to dismiss Bernie after all this time. The voter suppression and Hillary's tone—she tells him to change his tone, but she's the one that's attacking him and trying to tear him down because she's afraid," Kerr said. "I've been very upset with the whole way it's been going but I'm also feeling a great sense of joy and hope. Real hope, not just the Obama hope." 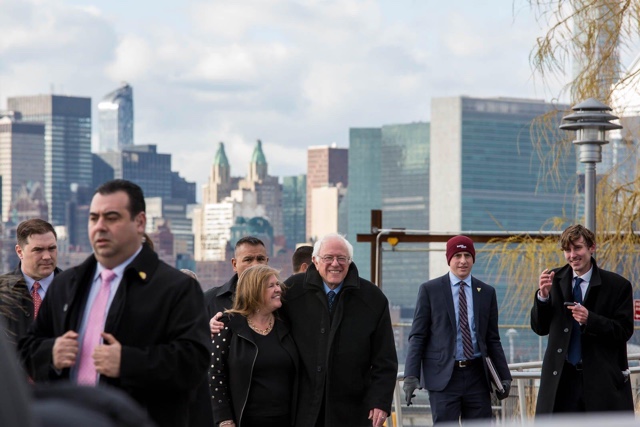 Jose Romani, 24, moved to Greenpoint from California to study health policy at NYU. He was still undecided about whom he is going to vote for.

"I definitely like the stuff Bernie is saying. I think I’m leaning more towards Bernie," Romani said. "I want to hear him talk about campaign reform, and issues that are important to New York, because I’ll be out here for the next couple of years."

Before Sanders took the stage, actor and native New Yorker Susan Sarandon spoke. A week prior, Sarandon triggered controversy with an appearance on MSNBC where she said she would consider voting for Donald Trump over Clinton because it might "bring the revolution immediately."

"You’re on the right side of history today, and you should be proud of yourselves," Sarandon told the crowd.

Sanders gave a speech twice the length of his earlier one in Midwood, stressing that one of the most significant pillars of his campaign was the need to reform campaign finance, and thanking his 6 million contributors for funding his improbably competitive effort. 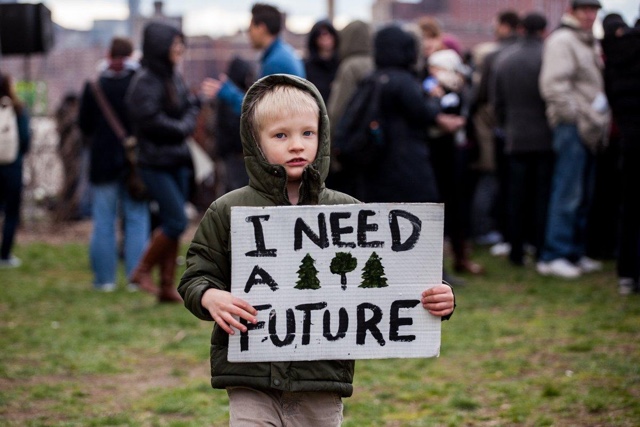 "We started this campaign about 60 points behind secretary Clinton, and the last two out of three national polls had us ahead of Secretary Clinton," Sanders said to his near-frozen supporters. "If we can win in New York state, and we can win a considerable number of delegates, we’re on to Pennsylvania, and other states, and we’re going to win there as well. With your help and energy, we can win this thing. Bring your friends and family to vote, and let the world know that this great state is part of the political revolution."

And with that, Bernie was gone, off to see Hamilton. Today, he continues his campaign to win over New York City, with events in Washington Heights, the Bronx, Long Island City, and Harlem. No word on whether he’ll have time to play a game of punchball while he's in town.