Bernhard Goetz On Death Of Man He Shot: "Sounds Like He Was Depressed"

James Ramseur, one of the teens shot by "Subway Vigilante" Bernhard Goetz in 1984, died in an apparent suicide 27 years to the day of the Goetz shooting. Goetz told us in an e-mail, "It sounds like he was depressed."

In 1984, Ramseur, 18, and friends Darrell Cabey, Barry Allen and Troy Canty, all 19, ran across Goetz on a 2 train. Goetz says the teens were trying to mug him, so he fired five times at them from his unlicensed Smith & Wesson. The teens, who claimed they were just panhandling, were all injured and Ramseur, who had been holding a screwdriver, lapsed into a coma. Goetz was acquitted of attempted murder, but served eight and a half months for gun possession charge.

On Thursday, Ramseur, 45, was found in a Bronx motel room, with two empty prescription pill bottles nearby. Goetz said in his e-mail, "It must have seemed weird to him, being raised with violence, spending 25 years in prison, and then coming back to a changed New York. Maybe his suicide was a statement, but I haven't figured it out." Goetz was apparently referring to the many years Ramseur served for raping, sodomizing and robbing a pregnant woman in 1986. 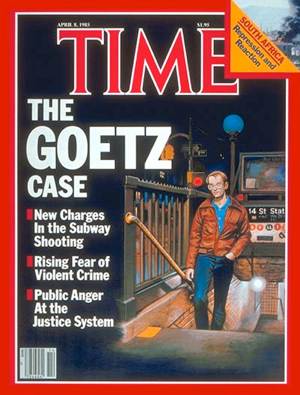 Goetz also said, "I might have met him at a NY Civic meeting about a year ago where [former mayor Ed] Koch was scheduled to speak. He seems to have become an honest person and was working for the caterer. But I'm not sure it was him."

Ron Kuby, who represented Cabey, who is now paralyzed and brain damaged, told the Daily News, "When you’re shot down by a racist madman, and most of the city hails your attacker as a hero, I imagine it takes a toll on your soul... And, apparently, Mr. Ramseur couldn’t take it anymore." And Koch said of Ramseur's death, "It's always sad when someone takes their own life."

Ramseur was sentenced for contempt of court during Goetz's trial, for repeatedly not cooperating as a witness when Goetz's lawyer, Barry Slotnick, was questioning him. A Times article from 1987 reports, "The trial judge said the young man's behavior before the jury had conveyed 'viciousness and selfishness more eloquently than words could.'"