Bentley, the Dog Who Could Drive a Car 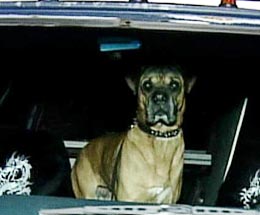 Like a scene out of My Dog Skip, a boxer and Shar-Pei mutt on Long Island named, ahem, Bentley drove his owner's van into a coffee shop last night. When 60-year-old Bryan Maher went into Cool Beanz in St. James to sign up for a slot on their open mic night, he left the engine running in order to keep the pooch warm. Perhaps thinking the D was for "Doggie," Bentley then put the car into drive and crashed it into the coffee house, cracking its window and breaking some of the furniture out front.

Cool Beanz owner Patricia McCarthy was a good sport about the incident saying the "poor dog didn't know what was going on." She even let Maher keep his open mic slot! And Maher has promised Bentley a new coat for Christmas so that he can leave him in the car without any fear of a repeat incident, saying, "He's a smart dog - obviously, he can drive a van."

The Post notes that it was "not immediately clear if cops ticketed Bentley for driving without a license." And since there's no footage of the not-yet-made Air Bud: Indy Five-Houndred, here's a clip of Bentley in the van's driver's seat:

#bentley
#cool beanz
#cute
#dog
#dog video
#long island
#st. james
Do you know the scoop? Comment below or Send us a Tip
A new Gothamist is coming! We’ve moved comments over to our beta site. Click here to join the conversation and get a preview of our new website.