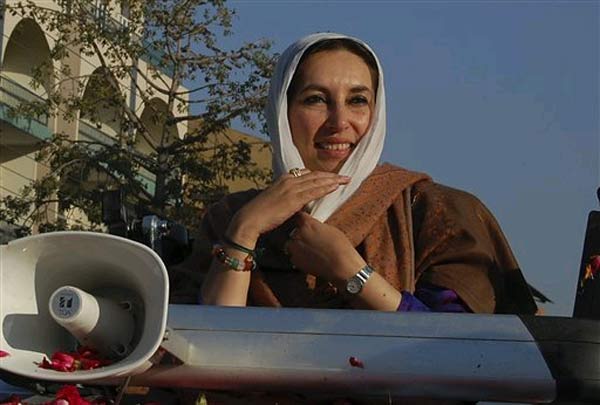 Earlier today, former Pakistani prime minister Benazir Bhutto was killed during a rally. The Western-educated (Harvard, Oxford) Bhutto had been living in Dubai and London for eight years, but returned in October to prepare for Pakistan's national elections (to be held next month) with hopes of returning to power. However, her return parade was bombed, killing 134 people and injuring more than 400. [Her obituary in the NY Times.]

U.S. politicians weighed in on Bhutto's death. President Bush said, "The United States strongly condemns this cowardly act by murderous extremists who are trying to undermine Pakistan's democracy," and presidential candidate Rudy Giuliani, whose campaign has perhaps emphasized fighting terrorism the most relative to other candidates, expressed his condolences to Bhutto's family and alluded to his credentials:

“The assassination of Benazir Bhutto is a tragic event for Pakistan and for democracy in Pakistan. Her murderers must be brought to justice and Pakistan must continue the path back to democracy and the rule of law. Her death is a reminder that terrorism anywhere — whether in New York, London, Tel-Aviv or Rawalpindi — is an enemy of freedom. We must redouble our efforts to win the Terrorists’ War on Us.”

Pakistani President Pervez Musharraf announced there would be a three-day mourning period and vowed to "liquidate terrorists from their roots." Newsweek's Michael Hirsh suggests that "Bhutto could become in death the kind of hero for democracy in Pakistan that she never quite became in life."

The Pakistan Mission to United Nations reiterated Musharraf's statement. When asked if there's anything travelers to Pakistan or Pakistanis in NYC should know, a mission spokesman said it's simply a great shock and hopefully the country will be able to move forward and the assassins will be found. And interesting fact: There was an assassination attempt on Bhutto in 1993 by Ramzi Yousef, who was found guilty of masterminding the 1993 World Trade Center bombing.

Photograph of Bhutto before her last public rally in Rawalpindi, Pakistan today by Mohammed Javed/AP