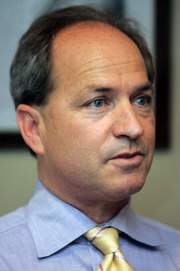 The Belmar, NJ mayor who hurt the feelings of Staten Island residents is ready to make amends. Mayor Ken Pringle (pictured) insulted the borough to the point of its residents calling for a boycott of his beach town.

Pringle isn't getting away with a simple apology for the SI slurs, the Staten Island Advance is reporting that "community leaders are planning to take the mayor of Belmar on a tour of the Island after he slurred 'Staten Island girls,' 'guidos' and 'blondes' in his newsletter earlier this month." He accepted the invitation, with one catch: the borough's reps have to spend a Saturday night in Belmar; he wants them to know the town is more than just "ugly headlines."

Some Staten Island residents sounded off on SILive yesterday, one saying the slander should go ignored "because surely Staten Island does not have time to be meddling in these kinds of petty, childish, been-there-done-that arguments about guidos." While another pointed out that if there's a "guido problem" on the Island, take care of it LI-style, with an an online movement to stop it!

#belmar
#Ken Pringle
#mayor
#new jersey
#staten island
Do you know the scoop? Comment below or Send us a Tip