The Post has a report today claiming that an "extraordinary number of Bellevue Hospital staffers called in sick on Friday" because of Ebola fears. Despite having a working quarantine unit on the seventh floor—and by all accounts, being fully prepared to deal with this crisis—staffers came up with a wide range of excuses to avoid going to Bellevue yesterday. So much for Don't Panic.

"The nurses on the floor are miserable with a 'why me?' attitude, scared to death and overworked because all their co-workers called out sick,” a source told the Post. "One nurse even went as far as to pretend she was having a stroke to get out of working there, but once they cleared her in the ER they sent her back up."

Health and Hospitals Corporation spokeswoman Ana Marengo denied there was a "sickout." The source also told them that Dr. Craig Spencer, the first NYer to test positive for Ebola, has been active participant in his treatment: "As a doctor, he knows a lot about medicine, so he would call the nurses station all day and going back and forth with doctors on what to do."

The Times has a long profile of Spencer today, with many friends and colleagues speaking to his selfless nature. He comes across as incredibly studious ("He was always the brainiac, always had his nose in a book"), well-liked ("He was cool with the jocks, and he was cool with the nerds"), and idealistic ("He was like, 'There’s a bigger purpose and things you have to get done'").

The profile also reveals that he hasn't just been sitting around instructing nurses on how to treat him: "[Fiancee] Morgan [Dixon] said, 'He called me this morning and said, 'I already have done yoga,'" said mutual friend Shalva Wise. "He woke up and stretched. That’s what he does." 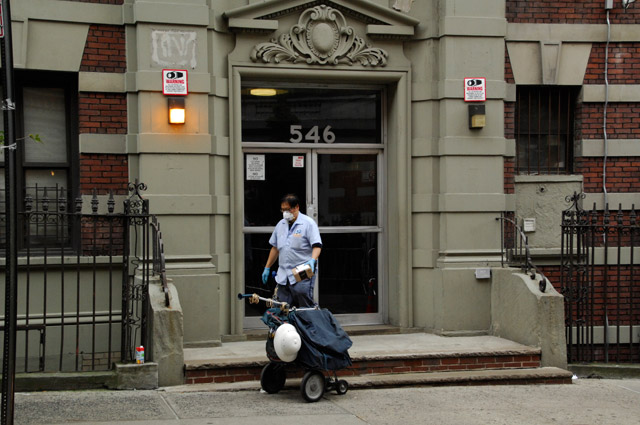 So why might trained professionals who are well-educated on how Ebola spreads be so scared to go to Bellevue, when there is very, very little possibility of contracting the virus? Perhaps it is the air of panic that has begun to set in, like the fact that Gov. Andrew Cuomo has started advocating on behalf of fear with "ominous hypotheticals." Also not helping: wantonly (and erroneously) critiquing Spencer in public, thereby stoking more hysteria. Here's the part that's really infuriating, via the Times:

“For four years, I have erred on the side of caution whenever it has come to dealing with a crisis, and that has served the state well,” Mr. Cuomo said. He added that he was in the midst of “a situation that truly tests the capacity and the ability of government to perform.”

But Mr. Cuomo’s remarks at times veered beyond the facts, as when he criticized the New York patient with Ebola, Dr. Craig Spencer, accusing him of having failed to follow the protocols set by his organization, Doctors Without Borders.

“He’s a doctor, and even he didn’t follow the guidelines for the quarantine, let’s be honest,” Mr. Cuomo said. In fact, Doctors Without Borders said, Dr. Spencer had followed its guidelines. And he was not under quarantine.

(Earlier in the day, Dr. Bassett, the health commissioner, said in an interview that Dr. Spencer had “handled himself really well,” adding, “I don’t want anyone portraying him as reckless.”)

#bellevue hospital
#craig spencer
#ebola
#illness
#panic
Do you know the scoop? Comment below or Send us a Tip