Bellevue Plans to Go From Psychiatric to Luxe 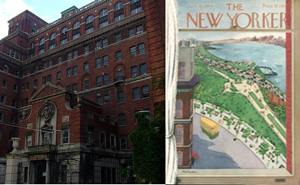 Many have characterized New York City's real estate boom as insane, and this latest chapter adheres to that theme. The imposing and occasionally frightening-looking Bellevue Psychiatric Hospital on Manhattan's 1st Ave. may be transformed into a luxury hotel.

According to the NYC Economic Development Corporation and Health and Hospitals Corporation, the current building would make an excellent location for a hotel and conference center to serve the medical and life sciences industry that has clustered along the East Side.

Bellevue, a beautiful if rundown-looking Italian Renaissance-style building, was built in 1931 by architect Charles B. Meyers. Former residents include jazz musician Charlie Parker, author Norman Mailer, and actress Edie Sedgwick. It's not to be confused as a getaway retreat for celebrities, however, as former Bellevue doctor, who treated Mark David Chapman, told the Post, "Our patients were not normal New York neurotics, but very sick people - otherwise known as crazy."

While some critics question the timing of an institutional rehabilitation--hospital to hotel--given the state of the real estate market, proponents say that the long corridors and small rooms, over 400,000 square feet, make Bellevue ideal as a prospective hotel.

Image from part of Bellevue Psychiatric Hospital, by malachie at flickr and a 1944 The New Yorker cover depicting the view from the hospital